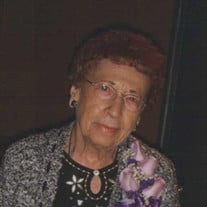 Memorials to United Faith Community Church or Nebraska Humane Society Alice Emma Berkheimer was born on February 21, 1919 in Memphis, Nebraska to Leo and Ruby (Ueberrhein) Berkheimer. Tragically, her 22-year-old mother died a month after Alice's birth. Her maternal grandparents, Charles and Emma took Alice as their daughter changing her name to Alice Emma Ueberrhein. She considered their 11 children as her brothers and sisters. Alice was especially close to Lorene, who was only seven months older. They were in the same grade and graduated together from Ashland High School. Alice met Harold "Bud" Feist at a dance. They married on September 20, 1939 and moved to their farm home a mile north of Leshara. In 1945, Alice’s brother Marion Ueberrhein married Bud's sister Opal Feist and they moved to a farm a mile north of Valley. The two couples shared close relationships with the Feist and Ueberrhein families. Alice kept busy on the farm with her garden, flowers, chickens, many farm cats and Bud's hunting dogs. In 1958, they built their beautiful dream home where Alice enjoyed cooking and entertaining friends and family. They continued to enjoy dancing, traveling, playing cards and family gatherings. Although they did not have their own family, Alice loved children. She and Bud were the beloved aunt and uncle of many nieces and nephews. Alice was a writer of letters and kept a daily diary in which she recorded their activities and extended-family events. She faithfully remembered the birthdays and anniversaries of many relative and friends. She and Bud celebrated their 25th, 40th and 50th wedding anniversaries with celebrations attended by many. In 1992, Bud was diagnosed with lung cancer and died on December 28, 1992 after 53 years of marriage. Alice was able, with help from family and Wayne Seitz, a good friend and hunting partner of Bud, to continue living on the farm. In 2012, after a fall at home and at age 93, she moved to Shalimar Gardens, an assisted living facility in Fremont. Alice celebrated her 100th Birthday on February 21, 2019 with parties at Shalimar Gardens for residents and for close family. Please honor Alice’s memory by sharing a story or memory that you have of Alice on her web page at www.reichmuthfuneralhomes.com

The family of Alice Emma Feist created this Life Tributes page to make it easy to share your memories.

Send flowers to the Feist family.