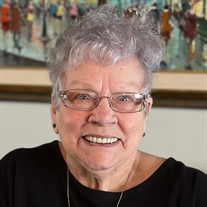 Alice Faye Larson peacefully passed away at the Josie Harper Hospice House Saturday March 26, 2022, after a brief battle with stomach cancer, at the age of 85. She was affectionately known as Boofie by family and friends or as Gramma by her numerous grandchildren and great grandchildren. Alice was the biological mother of eight children, however, many people considered her their surrogate mother. She always ensured that every child who crossed her threshold was safe, healthy, and happy. She was always happiest when surrounded by friends and family, and her joy was amplified during holidays. She would display that joy through her prized holiday decorations and her ceramic holiday goose (Yes, that goose). Sense of family was Alice’s defining trait that shaped her long life. She was born January 21, 1937, in Wellsville, Ohio to Charles D. and Gaynell M. (Congrove) Erwin, the fourth of nine children. Her happiest memories as a child were of her brothers, sisters, and parents. She graduated from Wellsville High School (Go Tigers!) in 1955; soon after she started her own family. In 1960 she moved to Nebraska and worked at Western Electric until 1967. In the 70s she developed her passion for making pottery that later turned into the award-winning business, The Clay Dragon, where she taught local children & adults how to create cherished ceramics. Alice’s commitment to her friends and family led her to take active roles in her community. She participated in her children’s countless school and sport activities, actively attended the Word of Life Church in Gretna, NE in the 1970s and early 80s, and became a member of the Gretna Planning Council. She later helped her community by becoming a certified nursing assistant at the Gretna Bethesda Care Center. As her children became older and began to move away, she lived in multiple parts of the US from the 1990s – 2010s to be closer to family, until she settled back in Nebraska. Alice was an active member of the Order of the Eastern Star of Nebraska and parishioner of Northwest Hills Church. Alice was preceded in death by her parents, brothers Bill, Bob, Kenny, and Keith Erwin, daughters Billie and Kelly Cline, son-in-law Mike Hendrickson, granddaughter Alyson Hendrickson, and great grandson Kody Knox. She is survived by her children; Rick Erwin of California, Darlena Hendrickson of Mesa, Arizona, Clifford Cline and Carl Cline, both of Lincoln, Nebraska, Nia Mollak and Dave Wilwerding of Omaha, and Greg Larson and Ann Sullivan-Larson of Eagle Grove, Iowa, umpteen grandchildren and great grandchildren, brother Floyd Erwin of Fremont, Nebraska, sisters Mary Ann Lundvall of Oakland, Nebraska, Nancy Brown of Salineville, Ohio, Bonnie Stearnes of Oakland, Nebraska, and several nieces and nephews. Visitation will be Friday April 1 at 10 AM at Northwest Hills United Church of Christ, 9334 Fort St., Omaha, NE 68134, followed by 11AM Memorial service, and noon luncheon. Private inurnment at the Elk City Cemetery at a later date. Memorials to Northwest Hills United Church of Christ or the family.

Alice Faye Larson peacefully passed away at the Josie Harper Hospice House Saturday March 26, 2022, after a brief battle with stomach cancer, at the age of 85. She was affectionately known as Boofie by family and friends or as Gramma by her... View Obituary & Service Information

The family of Alice Faye Larson created this Life Tributes page to make it easy to share your memories.

Alice Faye Larson peacefully passed away at the Josie Harper...

Send flowers to the Larson family.