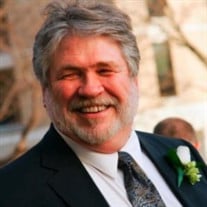 Allan Julius, age 77 of Omaha, died on Saturday, April 3, 2021 at Esprit Whispering Ridge Memory Care in Omaha. He was born the oldest child of Corbett and Geraldine (Peterson) Julius on April 16, 1943 in Fort Dodge, IA. Allan loved his role of oldest brother to his 5 siblings. His early years were spent on the farm outside of Manson, IA but the family later moved to town. Allan graduated from Manson High School in 1961. He excelled in many sports - basketball, football & track. He also participated in One Act Plays. After high school he attended Fort Dodge Community College where he played basketball & football until he graduated with an associate degree in 1963. Allan then attended Northwest Missouri University in Maryville, Missouri where he was a member of Tau Kappa Epsilon Fraternity. After finishing college, Allan moved to Omaha where he had a brief sojourn working at Kentucky Fried Chicken. Allan married Kathryn Riddle in 1969. They were married 33 years until her death in 2003. Allan & Kathy had one son, Mark, and twin granddaughters Kayla & Saxon. On February 2, 1970 Allan began employment with the Internal Revenue Service and eventually specialized in bankruptcy proceedings. He retired from the IRS after 35 years of service. After retirement Allan filled his days with many projects around the house. Part of his youth was spent working with a relative in a construction company. Those early lessons translated into an ability to fix or build many things and that led to many remodeling projects. He had a passion for watching birds & spent many hours keeping the bird feeders filled. He loved to read, work crossword puzzles & play bridge. He was an avid Husker football fan and never missed watching their games on TV. His favorite movie was Once Upon a Time in the West and his favorite musical group was The Eagles – with Hotel California easily being his favorite song. In 2005 met the next love of his life, Nancy Holmes, at your typical “pick up place” – a diet class. They were married December 14, 2006. Allan quickly became attached to Nancy’s children, their spouses and the 8 grandchildren who affectionately called him “Boppa”. He also developed a special bond with Nancy’s siblings, Paul Wagner & Diane Monahan. Allan was preceded in death by: wife, Kathryn; parents, Corbett & Geraldine; sister, Marge Legg; and brothers, Jim & Lynn. Allan is survived by: wife, Nancy of Omaha; sons, Mark Julius of Lake Manawa, IA & Jack (Maggie) Holmes of Omaha; daughters, Marci (John) Franzen and Micki (Matt) Ambridge all of Omaha; grandchildren, Saxon & Kayla of Windsor, California and Leila, Caitlin, Ellie, Charlotte, Max, Sophie, Thomas & Lucy all of Omaha; brother, Mike Julius (Bruce Porter) of Twin Lakes, IA; and sister, Jan (Denny) Flaherty of Pocahontas, IA; sisters-in-law, Nancy Julius of Storm Lake, IA and Patty Julius of Maricopa, AZ; brother-in-law Budd Legg of Ames, IA. Allan received excellent care at Esprit Whispering Ridge with the assistance of St. Croix Hospice. A celebration of life service will be held at 11 am, Saturday, May 8, 2021 at Reichmuth Funeral Home, 21901 W Maple Rd, Elkhorn, NE 68022. In lieu of flowers, memorials may be sent to Down Syndrome Alliance of the Midlands (10824 Old Mill Rd, Ste 8, Omaha, NE 68154)

The family of Allan Charles Julius created this Life Tributes page to make it easy to share your memories.

Send flowers to the Julius family.