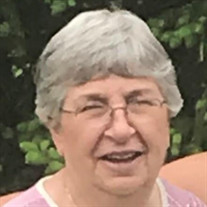 Memorials to SmileTrain.org Ana Ruf was born on March 10, 1938 in Croatia to Eli and Kata (Kokotovich) Uremovich. Throughout her life, Ana was feisty, hard-working and independent. When Ana was 25, she came to the United States to visit her brother, expecting to return to Croatia. It was here that she met Joseph Ruf, Jr. Ana married Joe in 1963 at St. James Catholic Church in Neshkoro, Wisconsin. They were blessed with five children: Joseph III, Anthony, John, Lucy and James. Ana and Joe raised their family on a farm in Wisconsin and lived in Chicago for several years until retiring in Omaha. Ana spent her early married years, raising her family and helping Joe on the farm. Later, she held several jobs in manufacturing. As time went on, Ana’s attention began to turn to her grandchildren, becoming a true “doting grandmother”. She enjoyed baking, crochet, knitting and loved to spend time in her flower garden. Ana was dedicated to her church, religious, hard-working, loyal, blunt and matter-of-fact. Affectionately referred to as Baki by family and friends, she will always be remembered for her “Baki-isms”. Those favorite sayings that she shared, which often included life lessons or the hard reality of a situation. Ana enjoyed her craft work and savored a dinner of keilbasa, sauerkraut and freshly baked bread. Ana passed away on Friday, February 26, 2021 at Ridgewood Retirement Village in Bennington, Nebraska at the age of 82 years, 11 months and 16 days. She was preceded in death by her parents Eli and Kata, husband Joseph, Jr, son Anthony, her sister Lucy and brothers John, Joe and Mike. Ana is survived by children Joseph III (Gale) of Madison, WI, John (Beth) of Birmingham, Alabama, Lucy Ruf (Vivek Kumar) of Omaha and James (Lindsey) of Lake Oswego, OR; 4 grandchildren; grand dog Noodlz; brother Charlie (Ana) Uremovich of Willow Springs, IL; sister Ruza (Zvonko) Brezak of Chicago, IL;

Memorials to SmileTrain.org Ana Ruf was born on March 10, 1938 in Croatia to Eli and Kata (Kokotovich) Uremovich. Throughout her life, Ana was feisty, hard-working and independent. When Ana was 25, she came to the United States to visit her... View Obituary & Service Information

The family of Ana Ruf created this Life Tributes page to make it easy to share your memories.

Send flowers to the Ruf family.