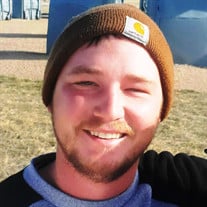 Andrew "AJ" Seidel was born October 21, 1994. He passed suddenly and unexpectedly in his sleep on November 22, 2021 at age 27, like all the great rock stars he grew up listening to. He was born and raised in Omaha, NE and graduated from Burke High School in 2013. He was a beloved son, a brother and most importantly to him, a father. Looking back at his life, there were years of the wild AJ: the toddler who earned the nickname “shark” who wouldn’t go to sleep until forced to stop moving, the accident prone little boy who became an Urgent Care regular, the teenager who baffled his family with the type of trouble he could get in, and the young man who felt so deeply that at times it was hard not to worry. In recent years, through the birth of his cherished daughter Eleanor, those around him were blessed to watch his transformation to a responsible, steady caretaker and devoted father. Before her, he never could quite figure out his life's purpose. Eleanor gave him purpose and gave every day so much more meaning to him. He was completely in love with her, with that primal bond that can't be expressed in words, but only through actions and the constant loving attention he gave her. He never begrudged missing a night out with friends. He was happy to spend every Saturday night on the couch with her laying on his chest. AJ was a simple man with simple tastes: Kraft Mac ‘n Cheese, Southern Comfort, and Mountain Dew. He loved to golf, watch Nebraska Cornhusker and Denver Bronco football, and wrestle with his brother and nieces. He had a wonderful sense of humor, often laughing with people until tears flowed. AJ lived life fearlessly at fully throttle. He will be missed forever by all who loved him. AJ had various occupations in his search for the right fit: a supervisor at Ameristar Casino, a groundskeeper for Woodhouse car dealerships, and, most recently installing medical equipment in hospitals with The RHINO Group, Inc. He ultimately planned to become an electrician. AJ was preceded in death by his paternal Grandparents, Robert and Frieda Seidel of Columbus, and his maternal Grandfather Robert Peterson of Omaha. He is survived by his two-year-old daughter Eleanor Jane and her mother Samantha Shirley, his parents Patti and Steve Seidel, his siblings Bethany (Dave) Layer and Kenny Seidel, nieces Evelyn and Eleanor Layer, maternal Grandmother Connie Peterson, and a number of aunts, uncles, cousins and friends. His memorial service is scheduled for Wednesday, December 1 at 11am at Reichmuth Funeral Home (21901 W Maple Road, Elkhorn). In lieu of flowers, memorials can be directed to AJ’s family to be reserved for Eleanor’s care and education. Donations can be made at the following link to GoFundMe: https://www.gofundme.com/f/memorial-fund-aj-seidel-eleanor-jane?member=&utm_medium=email&utm_source=customer&utm_campaign=p_email%2Binvitesupporters

Andrew "AJ" Seidel was born October 21, 1994. He passed suddenly and unexpectedly in his sleep on November 22, 2021 at age 27, like all the great rock stars he grew up listening to. He was born and raised in Omaha, NE and graduated from Burke... View Obituary & Service Information

The family of Andrew "AJ" Seidel created this Life Tributes page to make it easy to share your memories.

Send flowers to the Seidel family.