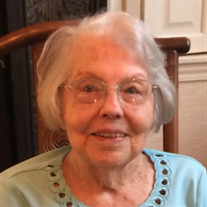 Anne Harwell Matteson Sisson Our dear mother, grandmother and friend, Anne Matteson Sisson, passed away peacefully in her sleep on September 9th, 2020 in Omaha, Nebraska where she lived in the care of her loving son’s family, Benjamin and Barbara Sisson. Anne was born in 1926 in New York City and resided in Mount Vernon, New York. She is predeceased by her brothers, Leonard Jerome Matteson Jr. and William Bleeker Matteson. Anne’s father, Leonard Jerome Matteson Sr., who died in 1966 and mother, Mary Jo, who died in 1960 were loving parents deeply involved in the Mount Vernon, New York community and baptist church. Anne was predeceased by her husband, Frank Elliott Sisson; mother-in-law, Lila Hazel Sisson Matteson; and sisters-in-law, Nancy Sisson Stork and Lucy Sisson Brown. Anne’s brother-in-law, Elliott “Skip” Sisson, resides in New Canaan, Connecticut with his wife Margo; and sister-in-law, Marilee Matteson resides in Nantucket. Anne was a passionate mother, tending to the needs of her growing family of four children while being a devoted wife and spouse while Frank pursued his military career as a graduate of the West Point Military Academy in the United States Air Force. Anne is survived by her children Frank Elliott Sisson and wife Ellen Taylor Sisson, of New Canaan, Connecticut; Benjamin Hawes Sisson and wife Barbara Sisson, of Omaha, Nebraska; Lucy Sisson Wilhelm of Farmington, Connecticut, and William Matteson Sisson and wife Kathleen Cullen Sisson of Avon, Connecticut. Anne loved hearing about the life journeys of her eleven grandchildren, Jack, Mary, Frances, Rob, Chris, Corey, Sean, Billy, Nicole, Thomas, and Andrew. She had many other relatives, cousins and extended family spread throughout the country. Given Frank’s military service and later private sector career aspirations, Anne was no stranger to relocating her family and with a gift and tenacity for meeting new people that gave her many lasting friendships in Oklahoma, Ohio, Japan, New York, Massachusetts, Okinawa, New Jersey, Florida, Virginia, Kansas, and finally Nebraska. Anne was a graduate of Miss Beard’s Boarding School in Orange, New Jersey and Denison University in Ohio (1948). Before marrying Frank, Anne worked at the New York Telephone Company in New York City, and was President of the Junior League Women’s Club of Westchester County, New York. She was an avid golfer, musician, choir singer, service volunteer, and real estate professional. Anne made friends literally everywhere she went given her gift to open up to anyone that happened to sit next to her. Her growing up nickname of “Sunny” was surely earned by her memorable smile that would light up a room and her warm and open nature that attracted people. She loved listening to and telling real life stories with all who were willing to engage. Her residence in her last years was at Maple Ridge in Omaha, Nebraska where she was loved by many as a constant leader of fashionability and conversation. The family is grateful for all those that cared for her and gave her comfort during her final months on this Earth. Anne will join her beloved husband at the West Point Cemetery columbarium with a private family service. The family asks that in lieu of flowers, please send donations on her behalf to the American Cancer Society and/or the American Heart Association.

Anne Harwell Matteson Sisson Our dear mother, grandmother and friend, Anne Matteson Sisson, passed away peacefully in her sleep on September 9th, 2020 in Omaha, Nebraska where she lived in the care of her loving son&#8217;s family, Benjamin... View Obituary & Service Information

The family of Anne Sisson created this Life Tributes page to make it easy to share your memories.

Our dear mother, grandmother and...

Send flowers to the Sisson family.