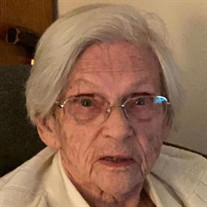 Ardis Ann Whalen was born on October 13, 1924 in Shubert, Nebraska to Charles and Jenny (Brown) Harris. She grew up in Shubert where she attended grade school and graduated from Shubert High School in 1941. Ardis went on to attend Kentucky Christian College. As a young girl, Ardis became interested in multiple art media including Oils, watercolor, acrylic, pen and ink, pencil and colored pencils. Ardis met Fred Whalen while working in the Richardson County Courthouse in Falls City, Nebraska and they were married on April 4, 1947 in Kansas. Ardis and Fred were blessed with five children – Tommy, Daniel, Candace, Amy and Julia. With Fred’s career as a Nebraska State Patrolman, the family moved around the state, living in Bellevue, Valley, rural Waterloo, North Platte and Stanton before Ardis moved back to Valley to be near family after Fred’s death. Ardis worked on the bomb line during WW II and as a bookkeeper for Woolworths in Falls City before her time at the Richardson County Courthouse. Her passion for art and crafts lasted her lifetime. She continued to paint and draw, added quilting, knitting, macrame and Scherenschnitte (paper cutting). Ardis worked in clay pottery, making bowls, vases, small statues and decorative items. She had a kiln and fired her own works. She was a Master Gardener and she made pressed cards from her own dried flowers that were picked from her own flower beds. Ardis was also an accomplished musician, playing both piano and organ. She was a composer and performer. Ardis played for her own enjoyment and as a service to God, performing in church. She was a writer and had short stories published in magazines. Ardis wrote skits and programs to perform for various church and ladies groups. She was active in several Artist’s Clubs and the Iris Society. Ardis was a loving, caring, Christian woman with an array of talents and a great sense of humor. She could often be heard saying “I love you a bushel and a peck”, “Keep your endgate up”, and “Keep smiling.” Ardis passed away on December 20, 2021 at Methodist Hospital in Omaha, Nebraska at the age of 97 years, 2 months and 7 days. She was preceded in death by her parents Charles and Jenny, sisters Lenore, Neldene and Wanda, brother Huebert, Husband Fred, daughter Candace and grandchildren Greg and Andrea. Ardis is survived by sons Tom (Nancy Movall) of Yutan, NE and Daniel (DeeDee) of Valley; daughters Amy Helmkamp of Valley and Julie (Richard) Hupfer of North Platte, NE; 11 grandchildren and 20 great grandchildren. Memorial service will be held later in the spring, and for family only. Memorials to St. Mark’s Lutheran Church in Valley; condolences to www.reichmuthfuneralhomes.com Reichmuth Funeral Home 21901 W. Maple Rd. 402-289-2222

Ardis Ann Whalen was born on October 13, 1924 in Shubert, Nebraska to Charles and Jenny (Brown) Harris. She grew up in Shubert where she attended grade school and graduated from Shubert High School in 1941. Ardis went on to attend Kentucky... View Obituary & Service Information

The family of Ardis Ann Whalen created this Life Tributes page to make it easy to share your memories.

Send flowers to the Whalen family.