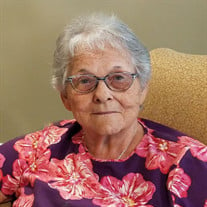 Memorials may be made to Westside Church, the American Heart Association, or Special Olympics Nebraska. Ardith Mae Hartford was born on July 8, 1936 to David Wendell and Helen (Zehnder) Hughes in Lincoln, Nebraska. Ardith grew up in Lincoln, graduating from Lincoln High School in 1954. As a girl, she was active in choir, Glee Club, YWCA Teens, and church activities. She also enjoyed sewing, reading, and babysitting. Ardith received her Bachelors of Science in Education from the University of Nebraska – Lincoln in 1958. Ardith married Richard “Dick” Hartford on June 6, 1959 at the 2nd Presbyterian Church in Lincoln. To this union, four children were born: Timothy William, Jeanne Elizabeth, Alan Hughes, and Jill Renee. Ardith and Dick spent their early years in Valley before moving to Fremont in 1970. They raised their family there until they came to Omaha in 1986. One of Ardith’s first jobs was to operate the elevator at the JC Penney’s store in Lincoln. She taught typing, short hand, office practice and home economics in Waterloo. Ardith and Dick owned the Valley theater; she sold tickets and concessions, while Dick ran the film projector. She taught as a substitute teacher at Fremont High School after leaving teaching full time to stay home with her children. In the mid ‘70s, Ardith worked at Bell Typewriter and Office Equipment, the family business. She started working at Valmont as an administrative assistant in 1980 and later joined the company Dain Bosworth in Omaha. In 1988, Ardith began teaching part time at Nebraska College of Business and transitioned to full time teaching of keyboarding, DeskTop Publishing, and related courses. She retired in 2001 and looked forward to spending more time with her grandchildren. Ardith enjoyed all sorts of craft projects and went to ceramics classes weekly in the ‘70s and ‘80s. She also liked to read, bake, and was the first in her family to take up digital photography when it was still in its early stages. Ardith especially loved to travel. Ardith and Dick went to Europe three times and took countless cross-country road trips to visit and babysit the grandkids. When her children were young, Ardith and Dick would take their kids on family weekend camping trips to Camp Moses Merrill near Linwood, Nebraska. Ardith’s love to travel continued into her retirement. She enjoyed flying to California, Chicago or Philadelphia to spend a few weeks visiting Alan and dog sitting, while he spoiled her with shopping trips, sightseeing, and dining out. Ardith and Dick took a trip to Alaska to celebrate their 50th wedding anniversary in 2009. Ardith and Dick volunteered at the Rose Children’s Theater and enjoyed taking their grandchildren to performances. As they became old enough, Zach, Jacob, Becky, Andie and Bryson would volunteer alongside their grandparents, sharing many special memories. Ardith and Dick also volunteered at the Holland Center for the Performing Arts and the Orpheum Theater as members of the Ambassadors. They were members of the Baptist Presbyterian Church in Valley, First Baptist in Fremont, and Westside Church in Omaha. Ardith sang in the choir at all three churches, was in the women’s Rebecca Circle at First Baptist Fremont, and a member of Christian Business Women of Fremont. Ardith loved seeing her children and grandchildren graduate from high school, college, and graduate school. Education and a strong work ethic were very important to her and something she passed along to her children. Ardith’s family will always think of her as an extremely intelligent, compassionate, and generous mother and grandmother. Ardith passed away September 7, 2020 at Methodist Hospital in Omaha at the age of 84 years old. She was preceded in death by her parents David Wendell and Helen (Zehnder) Hughes and her brother David Elwyn Hughes. Ardith is survived by her loving husband of over 61 years, Richard; her children: Timothy (Teresa) Hartford of Pleasant Prairie, WI, Jeanne Kalina of Omaha, Alan Hartford of Medford, MA, and Jill (Gerald) Huebert of Omaha; 11 grandchildren; 2 great-grandsons; brother Arthur (Patricia) Hughes of Bethesda, MD; sister Nancy (Daniel) Gamber of Washington, D.C.; and many beloved nieces, nephews, and sisters- and brothers-in-law.

Memorials may be made to Westside Church, the American Heart Association, or Special Olympics Nebraska. Ardith Mae Hartford was born on July 8, 1936 to David Wendell and Helen (Zehnder) Hughes in Lincoln, Nebraska. Ardith grew up... View Obituary & Service Information

The family of Ardith Mae Hartford created this Life Tributes page to make it easy to share your memories.

Memorials may be made to Westside Church, the American Heart...

Send flowers to the Hartford family.