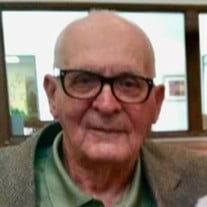 Memorials to Westside Church; live stream available at https://webcasts.lifetributes.com/1125795 Arthur Vernon Push, Jr was born on November 15, 1928 in Omaha, Nebraska to Arthur, Sr and Georgianna (Raymer) Push. He grew up in Omaha, attending Belvedere and Pershing grade schools and Omaha South High School. As a young boy, Art enjoyed football, baseball, hunting, riding his bike and stamp collecting. Art served his country in the Nebraska National Guard in the 128th Engineering Battalion. Art married Shirley Hamilton on December 16, 1949 in Atlantic, Iowa and they were blessed with four children: Diana, Arthur III, Edward and Todd. They have raised their family in Omaha, Bennington and Council Bluffs. Art worked at the bomber plant, owned a sheet metal business with a partner, entered the Sheet Metal apprentice program and worked for Prawl Engineering before founding the Art Push & Sons Sheet Metal Company with his sons. He enjoyed hunting, fishing and Nebraska football. Some of his other hobbies were actually businesses, including an antique business, and bicycle refurbishing . Art could build or fix anything and built or remodeled many of their homes and family homes over the years. He was a tough, stoic, silent man with a kind heart and loyal character. He was often seen in his favorite colors, Husker red and Camo. Art enjoyed watching westerns and sports and catching a nap in his recliner. He was an avid Husker fan and was treated to a day in Lincoln at Memorial Stadium where he was able to visit with Coach Scott Frost and Tom Osborne. Art savored a good steak, mac and cheese, a cold Pepsi and regular dinners out at the Surfside Club. He is remembered for his sayings “One life, one wife” and to the boys “Get off your butt and on your feet”. Art passed away on Monday, March 8, 2021 at Parson House in Omaha, Nebraska at the age of 92 years, 3 months and 21 days. He was preceded in death by his parents Art and Georgianna, wife Shirley and siblings Georgianna, Bill and Bob, and great grandson Cameron Conroy. Art is survived by his daughter Diana (Frank) Stiner of Omaha; sons Arthur III (Deborah) of Kennard, NE, Edward (Laurie) of Omaha and Eric “Todd’ (Susan) of Omaha; 23 grandchildren and 18 great grandchildren;

The family of Arthur Vernon Push, Jr created this Life Tributes page to make it easy to share your memories.