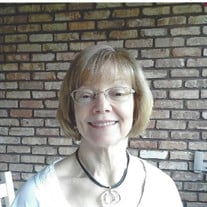 Audrey Ann Motycka Malena June 27, 1945 – June 23, 2020 In lieu of flowers, please send gifts in support of the Labyrinth at First Central Congregational United Church of Christ www.firstcentral.org. Audrey Ann Malena (née Motycka), 74, of Elkhorn, NE, passed peacefully in her sleep on Tuesday, June 23, 2020, following a long battle with dementia. Her daughter and son-in-law were present with her via video link. She was preceded in death by parents Meta and Emil Motycka, daughter Rachel Malena Donahue and brother Thomas Motycka. She is survived by spouse Daryl of Elkhorn, NE; daughter Sarah Malena, son-in-law Donald Wallace, and grandsons Nathan and Evan Malena Wallace of Leonardtown, MD; son-in-law Michael Donahue of Elkhorn, NE; sister Muriel Kaes of Denver, CO; brother Lyle of Longmont, CO and spouse Jenny; sister-in-law Janet Johnson of Gretna, NE and brother-in-law Michael Malena and spouse Joy of Leigh, NE; along with eleven nieces and nephews. Audrey’s childhood was mostly spent in Leigh, Nebraska. When she was six she was paired with a seven year old boy in the Memorial Day parade. She fell in love with the shy boy in the brown tweed sport coat. She did not see him again because she went to school in town, and he went to a country school. Later Audrey’s family moved to Buffalo, New York where Audrey spent her remaining elementary and junior high school years. The family returned to Leigh when she was in high school. Audrey and Daryl began dating before he realized that she was the pretty girl in the lime green dress that he had fallen in love with on Memorial Day years earlier at the cemetery. Audrey and Daryl were married in 1964 while she was an undergraduate and he was in dental school at the University of Nebraska at Lincoln. Rachel was born in 1971 and Sarah in 1974. Following her marriage to Michael Donahue, Rachel developed a rare form of leukemia and required a bone marrow transplant. Sarah was her donor. Rachel died in 1994 and Mike chose a burial plot at the Leigh Cemetery that happens to be the very site where Audrey and Daryl met. The story can be found in the “How We Met” series (Nov. 22, 2014) in the Omaha World Herald. Audrey loved her family and almost all of her spare time and vacations were focused on visiting family members throughout the country. Audrey was active in professional and volunteer activities throughout her life. She earned a bachelor’s degree in Early Childhood Development and a Master’s degree in Marriage and Family Therapy. She focused especially on family therapy, spirituality, and grief counseling. Audrey had her own private practice and served as a professional mediator. She also led spirituality and grief workshops, was active in the Omaha chapter of Compassionate Friends, and was a Certified Labyrinth Facilitator. She and Daryl collaborated in the creation of the Labyrinth at First Central Congregational Church in Omaha, where Audrey was an active church member. A private memorial service will be held for close family. A Celebration of Life service will be scheduled at a later time.

The family of Audrey Ann Malena created this Life Tributes page to make it easy to share your memories.

Send flowers to the Malena family.