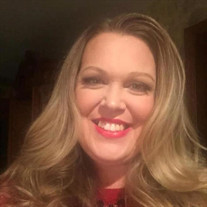 https://www.lordoflifeelkhorn.org/streaming-links-for-bobbi-wegners-service/ Bobbi Jo Oshel Wegner was born on September 13, 1975 to Bob and Linda Oshel in Fremont, NE. She graduated from Schuyler Central High with the class of 1993. While growing up in Linwood, she enjoyed working at Camp Moses Merrill as a horse trail guide during the summers. Once out of high school, Bobbi worked as a photo-finish photographer at the horse race track in Columbus, NE and, for a short period, she moved to New Orleans to work as a photo-finish photographer. Bobbi attended Metro Community College in Elkhorn, NE for photography and afterwards became a wedding photographer. She also worked at Behlen manufacturing as a graphic design artist. Bobbi met her husband Bill while visiting the dentist office in 1994 where he was working as a dental technician. After a year of dating, they bought their first house together in Genoa, NE and eloped on December 22, 1995. They had their church ceremony on October 12, 1996 and they celebrated both anniversaries every year. Bobbi and Bill ultimately made their home together in Elkhorn, NE where they raised their family of four boys: Nate (Lea), Corbin, Kaden, and Braxton. Nate and Lea blessed them with 4 beautiful grandchildren: Maverik, Emmy, Ryker, and Aurora. For over 20 years, the family has been members of Lord of Life Lutheran Church in Elkhorn, NE. Bobbi was very involved with many church activities and loved donating her time designing and painting the murals, props, and decorations for Vacation Bible School, which she looked forward to every year. Bobbi had many hobbies and passions, mostly involving her incredible artistic and creative talents. She was known for decorating cakes for all occasions, photography and drawing. She loved vacationing, gardening and flowers, and dreamed of owning and growing her own lavender farm someday. Bobbi loved family and friends and always enjoyed the many family get-togethers! Spending time and sharing her love with her children, parents, brothers, sisters, nieces, nephews, aunts, uncles, in-laws, sisters-in-law, brothers-in-law, grandparents, grandchildren, neighbors, congregation and friends meant the world to her. Bobbi was a fighter and hero to others battling cancer. She always kept an infectiously positive attitude during her 13 year battle with cancer and she never gave up! Her positivity, drive and creativity truly made the world a better place. She was and will always be an inspiration and hero to many, and loved by all that she touched. She was preceded in death by: her grandfathers, Charles Timm and James Oshel. Bobbi is survived by: her husband, Bill Wegner of Elkhorn; her boys’, Nate (Lea) of Gretna, Corbin, Kaden and Braxton all of Elkhorn; her parents, Bob and Linda Oshel of Omaha; four grandchildren; siblings, Todd Oshel (Andrea) of Little Sioux, IA, Barb Sechser (Duane) of Harrisburg, SD, Shelly Palmer of Linwood, NE, Angela Smith of Elkmount, AL, Blaine Shelton, Kim Rusk (Mike) and Mindy Shelton all of Columbus, NE and Lynn Cohen (Craig) of PA; grandmothers, June Timm of Nickerson, NE and Jean Wilson of Elkhorn, NE A memorial fund is being established for her Boys' College Fund. and can be left or mailed to the funeral home. The Service will be webcasted from the Lord of Life Lutheran Church website on Thursday.

https://www.lordoflifeelkhorn.org/streaming-links-for-bobbi-wegners-service/ Bobbi Jo Oshel Wegner was born on September 13, 1975 to Bob and Linda Oshel in Fremont, NE. She graduated from Schuyler Central High with the class of 1993. While... View Obituary & Service Information

The family of Bobbi Jo Wegner created this Life Tributes page to make it easy to share your memories.

Send flowers to the Wegner family.