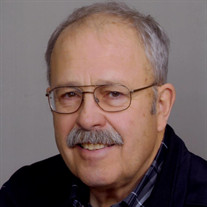 C. Mack Bolyard was born May 4, 1950 in Emporia, Kansas to Oliver “Pete” and Hazel (Johnson) Bolyard. Mack grew up in Osage City, Kansas and attended 1st and 2nd grade at 94 Country School, and then 3rd through 8th grades at Osage City Elementary School. He graduated from Osage City High School in 1968. Following high school, Mack spent a year and a half at Dodge City Community College before transferring to Kansas State University, where he graduated in 1972 with a Bachelor’s degree in Animal Science and Industry. While growing up in Kansas, Mack enjoyed hunting and fishing, and played basketball, baseball, and football. Mack married Susan M. Davies on June 15, 1974 at Lebo United Methodist Church in Lebo, Kansas, and to this union, two children were born; Ashley Adele and Luke Andrew. The family has made their home in Omaha, Nebraska since 1991. Mack worked for many years for the United States Department of Agriculture in food safety and inspection. He and Susan have been active members of Faith Westwood United Methodist Church. His favorite color was red, and he enjoyed listening to country music, but his favorite song was “I Can Only Imagine”. He loved all kinds of food, especially breakfast places, and he was right at home sipping an iced tea and watching a Hallmark movie with Susan. Mack was a hard-working, family man, who enjoyed being social (he never met a stranger). He was known as a professional storyteller and was a talented dog trainer/dog whisperer. He cherished his family and loved cheering for all of his granddaughter’s sports teams. He was an avid hunter and fisherman, and spent countless time netting the fish that Susan caught! Mack also was an amateur photographer, pigeon fancier, and enjoyed woodworking and antiquing. He was always visiting or helping the neighbors in some way, and he loved sharing his fruits and vegetables with all their neighbors and friends. Mack will be remembered most for his appreciation of life, and his generosity to others. Mack died on Friday, May 28, 2021 at CHI Bergen Health Hospital at the age of 71 years, and 24 days. He was preceded in death by his father Oliver “Pete” Bolyard, his mother and stepfather Hazel and Albert Hendrickson, and brother-in-law Robert Phillips. He is survived by his wife of 46 years, Susan M. Bolyard, daughter and son-in-law Ashley and Doug Sloane of Lynden, WA, son and daughter-in-law Luke and Kari Bolyard of Adams, NE, granddaughters Amanda and Megan Sloane and Kinley and Elsie Bolyard, a sister Joan Phillips-Fowler and her husband Harry Fowler, and several nieces and nephews.

C. Mack Bolyard was born May 4, 1950 in Emporia, Kansas to Oliver &#8220;Pete&#8221; and Hazel (Johnson) Bolyard. Mack grew up in Osage City, Kansas and attended 1st and 2nd grade at 94 Country School, and then 3rd through 8th grades at Osage... View Obituary & Service Information

The family of Mack Bolyard created this Life Tributes page to make it easy to share your memories.

Send flowers to the Bolyard family.