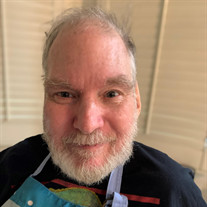 Carl was born on November 27, 1958 in Lawton, Oklahoma to Russell Reeser and Shirley (Humphrey) Reeser, the oldest of three children. The family later moved to Fremont, Nebraska. Carl was born with many challenges, including deafness. However, Carl developed his own version of sign language, gestures, and facial expressions to make sure everyone knew his feelings and needs. Carl also found a way to turn limitations into strengths as developed a keen attentiveness to others. He had a way of really making others feel seen, as he never failed to notice and comment when someone got new clothes, new glasses, or changed their hair. Carl’s sweet smile and kind comments lifted the spirits of those around him. Bowling was an activity that Carl loved, and he was also an avid crocheter. He had an amazing collection of yarns and hooks purchased on many visits to the craft stores where he flirted his way through the aisles and was a favorite among the workers. Carl also LOVED Husker football! He had a poster on his wall of all of Tom Osborne’s championship rings, and every night before he went to sleep, he would point to the poster, and point to himself to indicate that he was a part of that winning history. Carl thoroughly enjoyed dressing up and had a massive collection of funny hats, t-shirts with humorous sayings, rings, and bracelets. But more important to him than all of those things were his watches. Most days he would wear four at a time, two on each arm. If those watches didn’t all show the same time, he knew it and would let everyone else know that they needed to fix it! Carl found so much pleasure in the simple things in life. He loved eating pizza, drinking Coca-Cola, and yelling at cars that were driving too slowly on the road. He laughed easily and was very sentimental. Carl enjoyed taking Polaroid pictures and kept them in an album. He loved to show people his pictures and would become tearful as he looked back at certain faces. For over 25 years, Carl received services from CSN, and he was beloved by all who supported him. He was a favorite for events and games, as he brought such joy and fun to them. Carl had a very large friend group that he developed through his years of working at different vocational sites and living in different homes. He was quick to share hugs and handshakes. He left a legacy that will be felt for a long time. Since 2017, Carl’s primary caregiver and best buddy was Rick Schroeder. Carl made a huge impression on the Schroeder’s close and extended family. He and Rick spent the last two years together due to COVID, and during that time bonded over many football games, drive-thru meals of Carl’s favorite (burgers, fries, and pop), putting together puzzles, and buying watches online. Carl’s presence changed those around him for the better, including the Schroeder’s grandchildren, who enjoyed learning his signs and helping him in any way they could. Carl had an incredibly special bond with their daughter, Marley, and his face would light up anytime he saw her. Their bond is something that she will carry with her for the rest of her life. Most of all, Carl was unbelievable sensitive. He had an acute intuition for other peoples’ feelings. He constantly asked others if they were OK, noticing if they were experiencing pain or distress. Even in times when he was doing poorly, he would offer comforting touch and reassurance to others. He truly cared about others and wanted to make sure they knew he could see them and what they were going through. Carl brought a great deal of joy to the world and he will be deeply missed by many. Carl was preceded in death by his father, Russell Reeser. He is survived by his mother, Shirley Reeser; brother, Ted Reeser; sister, Winnie Stoll; nieces and nephews: Jacob Reeser, Angel Robinson, Denise Patterson, Jaci Reeser, Rebecca Reeser, Sami Reeser, and Sierra Stoll; and many special friends he has made throughout the years.

Carl was born on November 27, 1958 in Lawton, Oklahoma to Russell Reeser and Shirley (Humphrey) Reeser, the oldest of three children. The family later moved to Fremont, Nebraska. Carl was born with many challenges, including deafness. However,... View Obituary & Service Information

The family of Carl Reeser created this Life Tributes page to make it easy to share your memories.

Send flowers to the Reeser family.