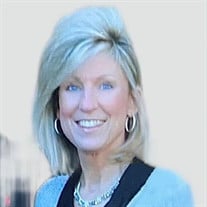 Catherine Louise (Hegarty) Welch was born April 7, 1960 to Roderick and Mary Lou (Norris) Hegarty. She was an “Air Force Brat”, so Cathy moved many times while growing up, but spent time in Alabama, England, and Nebraska. She graduated from Papillion High School in 1978, and then earned a Bachelor’s degree in Business at the University of Nebraska in Kearney in 1982. While at UNK, Cathy was a cheerleader, and was active in the Alpha Omega Theta sorority. Cathy married David Welch at St. Paul’s United Methodist Church in Papillion, Nebraska in 1989, and to this union, three children were born; Tyler, Chasen, and Molly. The family has made their home in Elkhorn. Cathy worked as an interior designer, but her most important role in her life was being mom to her kids. She will be remembered as a loving, caring, nice, friendly, and sharing woman, who was known for being kind to strangers, and could often be found taking care of the people in her life. She was a good friend to all who knew her. Cathy died after a long illness at her home in Elkhorn, Nebraska on September 29, 2021. She was preceded in death by her father Roderick Hegarty. She is survived by her husband Dave Welch of Elkhorn, children; Tyler, and wife Jamie Welch of Omaha, Chasen Welch of Harrison, AR, and Molly Welch of Omaha, mother Mary Lou Hegarty, brothers; Mike & Anne, Mark & Beth, and Jim & Kathy Hegarty, and sister Laura & Steve White. Memorial service 11:30 AM Monday, St. Andrew’s United Methodist Church, 15050 W. Maple Rd. Private interment. Visitation Sunday 4-6 PM at the funeral home in Elkhorn. Memorials to the National Pancreatic Cancer Foundation.

Catherine Louise (Hegarty) Welch was born April 7, 1960 to Roderick and Mary Lou (Norris) Hegarty. She was an &#8220;Air Force Brat&#8221;, so Cathy moved many times while growing up, but spent time in Alabama, England, and Nebraska. She graduated... View Obituary & Service Information

The family of Catherine L Welch created this Life Tributes page to make it easy to share your memories.

Send flowers to the Welch family.