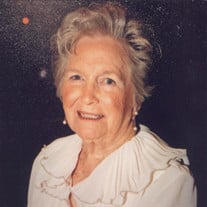 Private immediate family only services will be held at St. Patrick's Catholic Church in Elkhorn. Memorials to The Vetter Foundation in memory of Claribel (Topper) Cavanaugh, 20220 Harney St., Elkhorn, NE 68022. Born in Sheridan, Missouri on December 11, 1922, Claribel “Topper” Cavanaugh was one of seven children of Bertha and Joe Sanders. After graduating from Grinnell High School in Grinnell, Iowa, she attended the State Teachers College in Maryville, Missouri. Topper joined the US Marine Corps in May 1943 and served as a Staff Sergeant, working in Government Reservation efforts. During those two and a half years in the military, Topper traveled the country extensively, and even had the opportunity to enjoy tea at the White House with Eleanor Roosevelt. She received an Honorable Discharge from the military in December 1945. Topper married John J. Cavanaugh on November 11, 1946 and the couple lived in Omaha while John attended Creighton University Medical School. Upon his graduation, the couple moved to Denver, Colorado to open his new medical practice, and they had seven children: Scott, Caren, Ken, Cathy, Pam, John, and Patty. Topper’s beloved husband was unfortunately killed in a plane accident on November 1, 1967, and she moved the family to Carroll, Iowa, where she lived until 1978. Topper resided in Omaha, Nebraska until she peacefully passed on September 14, 2019 at Brookestone Meadows, at the age of 96. Topper is a beloved Mother, Grandmother of 15, and a Great-Grandmother to 22. She is most remembered for her beautiful smile and fun-loving spirit. Her sugar cookies are irreplaceable, Christmas ornaments will be forever cherished, and she is loved and deeply missed by all. We love you, Topper, Mom, and Grandma. Rest in peace forever.

The family of Claribel "Topper" Cavanaugh created this Life Tributes page to make it easy to share your memories.

Private immediate family only services will be held at St. Patrick&#39;s...

Send flowers to the Cavanaugh family.