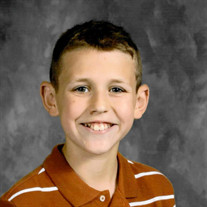 Live Stream Monday's service at: https://www.standrewsomaha.net/watch-live/ Colin Bloom was born in Lincoln, Nebraska on November 3, 2008 to Jeffrey and Heather (Graff) Bloom. He lived in Lincoln with his parents and his older brother, Matthew, until the family moved to Omaha in November 2017. Colin went to Maxey Elementary in Lincoln through part of third grade, when he began attending Aldrich Elementary in Omaha. Colin completed fifth grade at Aldrich and was set to enter Kiewit Middle School this fall. Colin was active outside of school. In Lincoln, he played soccer beginning in Kindergarten with the YMCA and moved on to the Capital Soccer Association in Lincoln. He played basketball in the Lincoln Parks & Rec league as well as the YMCA. When he moved to Omaha, after playing in the YMCA league, he began playing select basketball for Omaha Sports Academy. He then decided to take up swimming the summer of his fourth-grade year, passing out of all levels of lessons that summer and joining the YMCA swim team and then the Millard Aquatic Club swim team. Participating in both select basketball and club swimming during the year kept him busy, with practices most nights and games or meets on the weekends. He loved music. He started playing cello in third grade, played with the fifth-grade orchestra in fourth grade, and auditioned and made the Omaha Area Youth Orchestra’s Concert Strings in fifth grade. In that group, he was a younger participant, but he made it to first chair cello ahead of sixth, seventh, and eighth graders. Unfortunately, the end of the season concert was cancelled because of COVID-19, so he did not get to perform as first chair. Colin liked to travel. He went with his family to Walt Disney World and Disneyland more than a dozen times. There, his favorite things to do were to ride roller coasters and see the Star Wars attractions. He loved Star Wars, Marvel, the Simpsons, Legos, Minecraft, playing video games, and drawing comics. When Colin heard a song he liked on the radio, you could be sure he would be signing and dancing along with it. Colin loved reading books, so much so he could not fit all of his books in his room. He also loved acting, participating in plays with the Lincoln Community Playhouse and Youth Actors Academy of Lincoln, and taking classes from the Rose Theater in Omaha. Colin enjoyed going to movies, and you would be hard pressed to find a movie or TV show he didn’t like. When he heard a quote in a movie, he would be sure to reference it later. He was remarkably well versed in pop culture for someone his age. He was also constantly helping his family take care of his older autistic brother, Matthew. He was kind and friendly to those around him. He was quick to make people laugh, tried to make new people feel welcome, was humble in his accomplishments, and loved his friends. Colin passed away at Children’s Hospital in Omaha on July 14, 2020. Surviving are his parents; Jeffrey & Heather Bloom, along with his brother, Matthew all of Omaha; maternal grandmother, Kay McLaughlin-Graff of Walton, NE; paternal grandparents, Bruce & Deb Bloom of Elkhorn; aunt and uncle, Dawn & Trent Melcher of Elkhorn and his four cousins, Chandler (Skye) Melcher of Sedalia, MO, Katiya, Rylan and Azaria Melcher all of Elkhorn. He is preceded in death by his maternal grandfather, Willard Graff. In Lieu of Flowers, Memorials are Suggested to: Omaha Area Youth Orchestra ~ oaya.org or to a Library of your choice, in memory of Colin

Live Stream Monday's service at: https://www.standrewsomaha.net/watch-live/ Colin Bloom was born in Lincoln, Nebraska on November 3, 2008 to Jeffrey and Heather (Graff) Bloom. He lived in Lincoln with his parents and his older brother, Matthew,... View Obituary & Service Information

The family of Colin J. Bloom created this Life Tributes page to make it easy to share your memories.

Send flowers to the Bloom family.