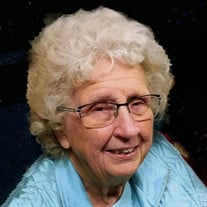 Corene Virgilene Viers, 88, of Elkhorn, NE passed away on July 19, 2021 at her home in Elkhorn, NE where she lived with her son, Perry after moving from her longtime farmstead in Windom, KS. She was known as the cornerstone in her family and admired for her gentleness, faith, and love for Christ and her Church. Born in Douglass, KS on January 6, 1933, she was the daughter of Wilmer and Virgilene (Robinson) Moomey. She graduated from Severy High School where she excelled in basketball and baseball, competing on the men’s varsity teams. Shortly after high school, Corene married Otis Viers on July 12, 1952. They were married for 49 years. They traveled throughout the Midwest before eventually settling on a farm of 40 acres near Windom, KS where she lived for 46 years. Corene went back to school while raising her children and became a registered nurse when she was in her 40’s. She loved her patients and continued to work into her late 70’s as she always enjoyed serving others. Aside from work, she most loved spending time with her family and her grandchildren whom she prayed for and supported without end. She also enjoyed church activities and tending to livestock on the farm, especially cows and calves. Most importantly, Corene loved Jesus. She was a long-term member of the Church of Christ. She was a true disciple of Christ and actively tried to spread her faith to all she knew. Corene is survived by two children, Deborah (Randy) Brown of McPherson, KS and Perry Viers of Elkhorn, NE; one brother, Martin Moomey of Severy, KS and three sisters, Phyllis Lauther of Malmo, NE, Diane Odgaard of Columbus, NE and Vivian Frana of Cedar Bluff, NE; seven grandchildren, multiple great-grandchildren and many other cherished family members and friends. She is preceded in death by her husband Otis, a son Marvin and a brother, Donald Moomey. A visitation will on Monday, July 26, 2021 from 5 pm till 7 pm at the Reichmuth Funeral Home in Elkhorn. Graveside service will be held on Tuesday, July 27 at 11 am, at the Elmwood Cemetery in Augusta, KS. In lieu of flowers, memorial donations may be given to the Sunny Slope Church of Christ - 3606 N 108th St, Omaha, NE 68164. The Viers Family wishes to thank all of our family and friends for their constant love and support.

Corene Virgilene Viers, 88, of Elkhorn, NE passed away on July 19, 2021 at her home in Elkhorn, NE where she lived with her son, Perry after moving from her longtime farmstead in Windom, KS. She was known as the cornerstone in her family and... View Obituary & Service Information

Corene Virgilene Viers, 88, of Elkhorn, NE passed away on July...

Send flowers to the Viers family.