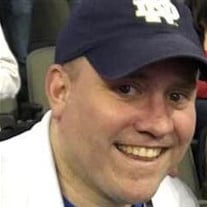 Memorials to the family for later disignation Curtis Ray Woodin: September 3, 1973-June 28, 2020. Born in Red Oak and raised in Webster City, Pocahontas, and Waverly, Curt ventured many places after graduating in 1992 with stellar academic and athletic careers at Waverly-Shell Rock. Starting at University of North Dakota, he became a loyal alum of Wayne State College where he played basketball with, and was coached by, some of his best, lifelong friends. After an internship at the Olympic Training Center in Chula Vista, California, Curt went on to receive his master's degree from Memphis University. This led him to another internship in Auburn Hills, Michigan. His love of basketball and its close-knit community next brought him to Iowa City to work for Future Stars, but his true passion was always college athletics. Before Curt’s stints at Impact Sports, Hy-Vee, and Streck, Wayne State, Angelo State, KU, UNI, and UNO were very fortunate to have him in their athletic departments. He continued to stay in touch with many of his colleagues and friends from all his stops along the way. Father, Son, Brother, and Friend. Curt embraced competition, but these were the titles he was most proud of. He loved hard and wanted to see others happy, especially his daughter, Madi. Without a doubt, he was in awe of her accomplishments on and off the volleyball court, but he was most grateful for the amazing young woman she has become. Curt cherished the moments they had together: watching endless hours of volleyball and Notre Dame football, attending Creighton basketball and College World Series games, mini golfing, eating dinner, or simply hanging out. Connection and community were his fortes, and many affectionately called him “Woody.” Wherever he went, “Woody” knew somebody or would make a new friend. Even more, he would find ways to stay connected by text, Facebook, and phone calls. He was always checking on people, congratulating them, celebrating them, or praying for them. “Woody” always made time for his family and friends, and he loved making memories together: grabbing dinner, road tripping, golfing, or attending a sporting event with them. Curt was one of the most genuine, kind-hearted people in this world. He will certainly be missed by many, but the impact he had on others will live on and be remembered forever. His family includes his daughter Madi; his parents, Jerry and EaVon Woodin; his brother and sister-in-law, Greg and Kim Woodin; his sister and brother-in-law, DeAnn and Garrett Akins; his nephew and nieces, Connor, Taylor, and Pearl.

The family of Curtis Ray Woodin created this Life Tributes page to make it easy to share your memories.

Memorials to the family for later disignation

Send flowers to the Woodin family.