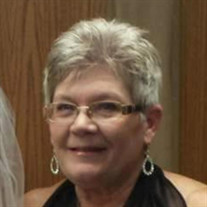 Cynthia Kaye Matteo was born in Omaha, NE on October 9, 1957 to parents Marion Dishong and Kaye (Shirley) Reeves. She grew up in Valley, NE, attending grade school and high school in Valley before graduating in 1975 and beginning studies at the Nebraska college of Business. Growing up, Cindy enjoyed bowling, reading, and track; she also was a member of the International Order of the Rainbow and later served as a Sunday School teacher. On September 3, 1978, Cindy married the love of her life, Keith R. Matteo and they were blessed with three daughters, Nicole, Cassandra, and Ashley. Cindy loved to do mother and daughter painting and cake decorating classes; she always made holiday events memorable, especially with her holiday baking. She was loving, patient, generous, and always quick to remind her family, “I love you more!” Cindy worked as a Legal Secretary, but also found time to explore many hobbies. She enjoyed making stained glass, reading, watching tennis, painting, crafting, gardening, canning, and cooking. When she wasn’t cooking for her family, Cindy loved to go to Village Inn to enjoy breakfast and a Diet Pepsi. She also undertook the project of restoring the Matteo Family Island in addition to her involvement in the American Business Women’s Association and Dinners for 8. After becoming a grandma, spoiling her grandchildren became a top priority, as well as loving on Roman, her Saint Bernard. Cindy’s faith was important to her, and in 2011 she was rebaptized. She was a selfless and kind woman and an amazing wife, mom, and grandma. Preceded in death by father Marion Dishong, mother-in-law Maxine Bumgarner, and son-in-law Kenneth Fisher. Survived by husband Keith of Valley, NE, daughters Nicole Matteo, Cassandra Matteo, and Ashley Fisher, grandchildren Matteo Luschen, Trinity Luschen, Braylon Fisher, and Paxton Wattier, mother Kaye Reeves, brothers David and Daniel Dishong, brother-in-law David Kluza, sisters-in-law Ann Albers and Louise Houlihan. Visitation Tuesday, Aug. 24 from 10-11 AM, followed by funeral service at 11 AM at the funeral home in Elkhorn. Private interment. Memorials to the family.

Cynthia Kaye Matteo was born in Omaha, NE on October 9, 1957 to parents Marion Dishong and Kaye (Shirley) Reeves. She grew up in Valley, NE, attending grade school and high school in Valley before graduating in 1975 and beginning studies at... View Obituary & Service Information

The family of Cynthia Kaye Matteo created this Life Tributes page to make it easy to share your memories.

Send flowers to the Matteo family.