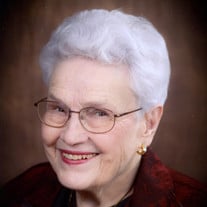 Elaine Randall, 96, a longtime resident of Weiser, ID, passed away February 10, 2020 at the Rose Blumkin Jewish Home in Omaha, Nebraska. Elaine was born July 7, 1923 in Wilder, ID, the daughter of Ward and Pansy Hume. She grew up in Wilder and left to attend, first the College of Idaho in Caldwell, then the University of Washington in Seattle where she earned a BA degree. In 1945, Elaine married Richard H. Randall and they moved to Weiser in 1947. She was a stay-at-home mom to the great benefit of her children and worked several part-time jobs until she began teaching at Weiser High School in 1963. There she taught English, speech and drama and then served as high school librarian for over 20 years until her retirement. She volunteered many hours at St. Luke’s Episcopal Church, Friends of the Library, Friends of the Hospital, The National Old Time Fiddlers Contest and Weiser Little Theater. She became a member of P.E.O. in 1959 in Weiser and always enjoyed being a member of this organization. Elaine was a loving wife and mother and a world class grandmother. She had many interests including stage acting, reading, travel with family and friends, gardening, horse racing and rugby. Elaine had a warm and generous personality and she could light up a room with her smile. She will be missed by everyone fortunate enough to have known her. She is survived by her son, David Randall of Tacoma, WA: daughter, Margaret Wellman of Omaha, NE; four grandchildren, Sadie, Chris, Francie and Katie; eight great grandchildren and numerous nieces and nephews. Elaine was preceded in death by her husband Richard, parents, brother Donald and son-in-law, Jon Wellman. A celebration of her life is planned for July 5 at 3:00 p.m. at St. Augustine’s Episcopal Church in Elkhorn, NE. Memorials may be made to St. Augustine’s Episcopal Church.

Elaine Randall, 96, a longtime resident of Weiser, ID, passed away February 10, 2020 at the Rose Blumkin Jewish Home in Omaha, Nebraska. Elaine was born July 7, 1923 in Wilder, ID, the daughter of Ward and Pansy Hume. She grew up in Wilder... View Obituary & Service Information

The family of D. Elaine Randall created this Life Tributes page to make it easy to share your memories.

Send flowers to the Randall family.