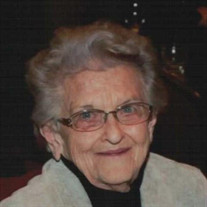 Memorials to Bethany Lutheran Church Live stream of the funeral will be available on Tuesday at 1 PM at https://webcasts.lifetributes.com/1112799 Darlene B. (Denker) Andersen, daughter of Chris and Magdalene Denker was born on Oct 19, 1927 at the family farm in rural Elkhorn, NE. She attended elementary school in rural Douglas County and Elkhorn High School. After graduating from high school, she worked at Union Pacific Railroad, Rob-See-Co, and Zimmerman Feed Yard near Elkhorn. While working at the Feed Yard, she met Edward Andersen and they were married on Nov 27, 1947. Shortly after, they started operating the family dairy farm south of Valley, where they raised their family of four children: Robert, Susan, Nancy and Peggy. During this time, they both were involved in numerous community organizations. Darlene served as a local 4-H Club Leader, Ladies Home Extension Club member, and served on various committees within Bethany Lutheran Church. Darlene was actively involved in the Valley American Legion Auxiliary for many years including holding many elected positions. Darlene and Ed were both dedicated and committed to the Grange organization for 60 plus years. During this time, Darlene held various offices at both the local and state level. She was the Women’s Activities Director for the Elkhorn V.E. Grange and the Nebraska State Grange for several years. Through the Grange, Darlene has made many stuffed toys for children in need. Darlene and Ed moved to Washington D.C. in November, 1979, when he was elected as President of the National Grange for eight years. During this time, Darlene also worked in the National Grange Office. She was involved in the development of a “National Grange Cookbook.” In 1988, they returned back to their farming roots to be near their family, building a home adjacent to the farm. Darlene worked for 17 years as bookkeeper for Woods Landing campground while Ed continued his interests in farming. She was a gifted seamstress and made many of her daughters’ dresses, including the bridesmaid dresses for their weddings. The past five years she was very active within the Bethany Lutheran Ladies quilting group and looked forward to their monthly sessions; at this time, she changed her home office into her “quilting room” where she spent many, many hours. She loved reading a good book, puzzles, gardening, and her daily lunch outings with family members. She enjoyed her time spent with her children, grandchildren and great grandchildren. She was the cornerstone for the family. Darlene passed away on January 7, 2021, at the age of 93. She was preceded in death by her Husband Edward, parents Christian and Magdelene, 1 brother Chet Denker, 1 sister Helen Smith, and great grandson Mason Schultz. She is survived by her children: Robert and Jackie Andersen, Susan and Terry Gilfry, Nancy and John Prestia, and Peggy and Kent Merryweather; 10 grandchildren and 16 great grandchildren; sister Marge Grabow; brother Howard Denker; brother in law Nels Andersen; and many nieces and nephews. The family would like to say “Thank You” for your support, prayers, and friendship.

Memorials to Bethany Lutheran Church Live stream of the funeral will be available on Tuesday at 1 PM at https://webcasts.lifetributes.com/1112799 Darlene B. (Denker) Andersen, daughter of Chris and Magdalene Denker was born on Oct 19, 1927... View Obituary & Service Information

The family of Darlene Barbara Andersen created this Life Tributes page to make it easy to share your memories.

Live stream of the funeral...

Send flowers to the Andersen family.