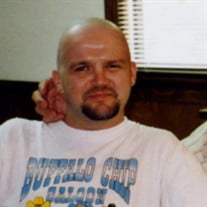 David J. Haun, was born to Joseph and Millie Haun (VanAsperen) on July 7, 1967 at the Dodge County Hospital in Fremont. He attended Clarkson Elementary until the family moved to Elkhorn, NE in 1977. He graduated from Elkhorn High School in 1986. After high school David attended the University of Nebraska-Omaha. Dave had a great work ethic and was well-liked by his employers. He worked in the Customer Service Department at Aetna Insurance Company for the last eleven years. Dave had a love of music and attended concerts whenever he had the chance. This appreciation was wide-ranging – from his favorite heavy metal bands, to the classic music of crooners Dean Martin and Frank Sinatra, to the music of the up and coming Hank Williams III. Dave had a brain for statistics, football especially - his favorites were the Huskers and the Steelers. He was a diehard fan for both teams. His love of Nebraska football began at an early age, when he learned his kindergarten teacher had a son who played for the Cornhuskers. For Dave, the NFL draft day should have been a national holiday. Dave was a funny, loyal, loving, sarcastic, and determined man. Dave was quick with a joke and quick with a smoke. While Dave was a man of many opinions – whether music, sports, or current events – he did not assume others shared his views, but he made no apologies for his own. Dave had a soft spot for his nephews and nieces. Although he tried not show too much emotion, he asked about them and how they were. David John Haun at the age 52, died on Monday, June 1, 2020 at Nebraska Medical Center in Omaha. He was preceded in death by his parents, Joseph and Mildred Haun; infant brother, Philip Haun; sister, Cecilia Haun; and many beloved aunts and uncles. David is survived by his brother, Joseph (Carolyn) Haun of Elkhorn; sisters, Jean (Rick) Hansen of Elkhorn, and Mary Jo (Bill) White of Slater, Iowa; as well as many nieces, nephews, friends and co-workers. A private family inurnment will take place at the Memorial Cemetery in Fremont, NE. The family is planning a Celebration of Life service at a later date to be held in Elkhorn.

David J. Haun, was born to Joseph and Millie Haun (VanAsperen) on July 7, 1967 at the Dodge County Hospital in Fremont. He attended Clarkson Elementary until the family moved to Elkhorn, NE in 1977. He graduated from Elkhorn High School in... View Obituary & Service Information

The family of David J Haun created this Life Tributes page to make it easy to share your memories.

Send flowers to the Haun family.