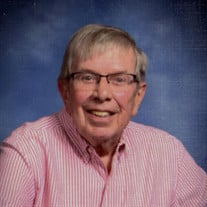 David Marcus Kroger was born on May 21, 1940 in Omaha, Nebraska to Marcus and Marjorie (Godsey) Kroger. He grew up in Herman, Nebraska and graduated from Herman High School in 1958. Dave continued his education at Wayne State College, graduating in 1962 with a degree in History and later received his Master’s and Specialist Degrees in Education Administration from the University of Nebraska Omaha. Dave married Eileen Thomas on December 18, 1965 at St. John’s Lutheran Church in Yutan, Nebraska and they were blessed with two children: Julie and Marc. Dave started his career as a teacher and basketball coach in Yutan. He then moved into administration, serving as a high school principal/activities director at Cedar Bluffs and later, superintendent at Guide Rock, McCool Junction, North Loup Scotia and East Butler. Dave was a people person and loved to visit. He never knew a stranger and delighted in being the neighborhood prankster. In retirement Dave spent countless hours with Eileen caring for their lawn and (her) garden. No item was too minor to not justify a “quick trip” to Omaha for them (Menards, Bakers, TJ, Fareway, etc!) especially if it could in any way be attributed to the grandkids. At home in his basement “man cave” Dave worked Sudoku and word search puzzles daily. Watching “the darn Cubs” was also a continual love/hate saga!! Winter months were also times for jigsaw puzzles. Dave and Eileen loved “day” trips on various missions---be it for groceries, wild flowers, or antiques. Dave passed away on Tuesday, September 29, 2020 at Bryan Medical Center West in Lincoln, from a devastating brain hemorrhage suffered the previous Saturday, at the age of 80 years. He was preceded in death by his parents Marcus and Majorie; sister Judy, her husband Jim and their son Jeff Campbell; Eileen’s parents Benny and Anna Thomas, and brother-in-law Richard Thomas. Dave is survived by his beloved wife Eileen; daughter Julie and her husband Jerry, of Sioux City, Iowa; son Marc and his wife Angie, of York, Nebraska; three grandsons, David, Daniel, and Jalen; brother and sister-in-law Ron and Nancy Thomas; sister-in-law Jayne Thomas; nieces; nephews; and many, many dear friends.

David Marcus Kroger was born on May 21, 1940 in Omaha, Nebraska to Marcus and Marjorie (Godsey) Kroger. He grew up in Herman, Nebraska and graduated from Herman High School in 1958. Dave continued his education at Wayne State College, graduating... View Obituary & Service Information

The family of David Marcus Kroger created this Life Tributes page to make it easy to share your memories.

Send flowers to the Kroger family.