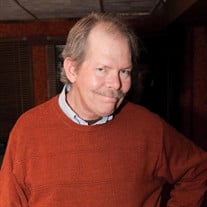 David Roger Peters was born on September 1, 1950 in Omaha, Nebraska at Immanuel Hospital to his loving parents, Roger and Virginia. During birth, his umbilical cord wrapped around his neck and his doctors diagnosed him with cerebral palsy. At the time, they were not confident he would be able to walk. His parents remained devoted to his physical therapy and took him to the many appointments and taught him not only how to walk, but also how to ride a bike. David never let his handicap define him. He lived in Shenandoah, Iowa until he was three years old and Roger took a position at KMTV moving the family to south Omaha. At the age of six, David became a big brother to his lifelong sidekick, Mark Peters, whom he lovingly nicknamed dog-breath as an adult; the two shared interests of music, books and cars. Their family of four moved to a home at 5356 North 47th Avenue in Omaha, which was where Dave lived for the rest of his childhood. He often cited his deep friendships including one with his longest friend, Tom Maher. The two met on the bus on their way to kindergarten and remained close. Their many adventures included trips to Colorado, Minnesota, New Orleans, and the entire west coast. David’s childhood included five long and memorable bike rides with his father, Roger. It was his idea to take the first of many bicycle trips because he wanted to earn a Boy Scout merit badge. From eastern Nebraska, they traveled to Yankton, South Dakota, Lake McConaughy, and Big Thompson Valley, Colorado camping all along the way. Dave loved the freedom riding a bike offered and continued to ride through his adult life. While still in high school, he was active in the youth group at Emmanuel Baptist Church, and he worked for the American Baptist Convention in Green Lake. In 1968, David graduated from North High School and happily worked as an ice cream truck driver the summer before attending Kennedy College in Wahoo. While in college, he would travel home to help his family with the building of their lakefront home at 156 Ginger Cove Road. Dave graduated with a degree in history in 1972, and always enjoyed reading about historical events and politics. David’s professional path took him to Grand Island, Omaha and Valley working for various companies and in many roles, including that of a shipping auditor. He lived for the last 15 years in Leshara, Nebraska tending to his garden, hosting bonfires, and remaining deeply connected with his family. He is a beloved son, brother, uncle, great-uncle, cousin, nephew and friend. Dave’s infectious, hearty laughter and optimistic, carefree attitude uplifted all those around him. One to not give in to worry or stress, he helped to teach others to go with the flow of life by both his example and by his penchant for jokes and Hawaiian shirts. His gift for humor, presence in conversations, and his love for his family will be dearly missed. On February 14, David passed away and joined his mother, Virginia in heaven. He is survived by his father Roger of Valley, brother Mark and sister-in-law Judy of Valley, nephew Andy (spouse Amanda), niece Libbi (spouse Ben), niece Bekki (spouse Dan), nephew Andy, great-nieces and nephews, Linnea, Willa, Madi, Nolan, and Ansley, and many loving relatives. In Dave’s memory, please consider reading a good book, planting a garden this spring, finding humor in the everyday, and/or making a donation to the Valley Public Library or United Faith Community Church. Memorial service 2 PM Friday at the funeral home in Elkhorn. Visitation one hour prior to the service. Inurnment at Pleasant View Cemetery, rural Leshara. Memorials to United Faith Community Church.

David Roger Peters was born on September 1, 1950 in Omaha, Nebraska at Immanuel Hospital to his loving parents, Roger and Virginia. During birth, his umbilical cord wrapped around his neck and his doctors diagnosed him with cerebral palsy. At... View Obituary & Service Information

The family of David Roger Peters created this Life Tributes page to make it easy to share your memories.

David Roger Peters was born on September 1, 1950 in Omaha, Nebraska...