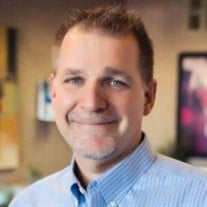 Dean was born in David City, Nebraska on December 23, 1969 to Donald and Patricia (Coufal) DeWispelare. He is originally from David City, NE, and grew up as a farmer’s son. Where he enjoyed helping his dad with farming, hunting, and riding mini bikes. His favorite sports to play were football and baseball, he also had a large collection of matchbox cars, and enjoyed trains. Dean attended David City High School and graduated in 1988. After high school, he attended college at the University of Nebraska Lincoln where he received his undergraduate degree, and then attended UNMC College of Dentistry where he received his Doctor of Dental Surgery (D.D.S) degree. Dean married the love of his life on December 14, 2002. In 2005, they opened their own dental practice, 3D Dental. Dean enjoyed taking his family to visit the farm he grew up on. He also took the family on adventurous RV trips, and skiing and boating trips, especially at Ogallala, McConaughy, and the Ozarks. Christmas was Dean’s favorite holiday, and every Christmas morning he made Belgian waffles with his own special recipe and served with a specific syrup. Cole and Bailey also acknowledged the memory of the very special day when Dean adopted them. Despite Dean’s profession, he had the biggest sweet tooth. He often visited the candy aisle looking for any kind of grape candy. Dean also enjoyed golfing, Husker football, rock music, and he was a collector of anything. Spending time with family was very important to him and he was very passionate about his career. His family will always remember how often he would say “Who Cares?”, and how he would tell them “Trust Me.” and “I love you more.” Dean was always present in the moment. He showed this by his generosity, selflessness, kind heart, and his deep care for others. He loved visiting with people and would light up during conversations, whether it be with a loved one or a stranger. Dean was preceded in death by Don DeWispelare, Emil Klement, Gene Roncka, his grandparents, uncle, and aunts. He is survived by his wife, Sabrina DeWispelare; children: Cole (Amanda) DeWispelare, Bailey DeWispelare (Nick), Cazzie DeWispelare, and Lawson DeWispelare; mother, Patricia DeWispelare; sisters, Dee (Jerry) Kabourek and Dawn (Chris) Grooms; in-laws: Sharron (Bill) Haas, Lezlie (Carl) Falcone, Yayle (Christy) Roncka, and Mary Roncka and her children; nieces, nephews, aunts, uncles, cousins, 3D Dental family, many friends, and beloved pets. Memorials can be made to the Memories for Kids Foundation at memoriesforkids.org

Dean was born in David City, Nebraska on December 23, 1969 to Donald and Patricia (Coufal) DeWispelare. He is originally from David City, NE, and grew up as a farmer&#8217;s son. Where he enjoyed helping his dad with farming, hunting, and riding... View Obituary & Service Information

The family of Dean Donald DeWispelare created this Life Tributes page to make it easy to share your memories.

Send flowers to the DeWispelare family.