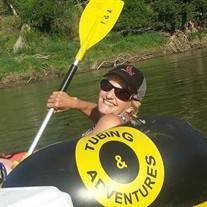 Debra Brown, age 65 of Elkhorn, died on Monday, August 19, 2019 at her home in Elkhorn with her loving family at her side. She was born the daughter of Jack and Helen (Pedersen) McNichols on May 29, 1954 in Blair, NE. After graduating from High School, she attended the University of Nebraska at Lincoln for studies in Food & Nutrition and later would become involved in the Dale Carnegie Course. On December 4, 1982, Debra was united in marriage to Ted Charles Brown in Blair, NE. She started her career as a baker in Blair, Lincoln and Omaha, and later become Bakery Manager for HyVee stores in Fremont, NE, Omaha #5. So, it went without say, she would create cakes and cookies for special birthdays and weddings for her family. She would sew all of the Halloween costumes for her kids, thus becoming the best mom a kid could have. All those who were touched by her, walked away with a smile and a sense of direction. After retiring in May from Home Depot after 18 years of service, she remarked that she didn’t regret a thing. There never was a time she passed up an opportunity to have a little fun, if it sounded fun, she was going to be involved. In her mind, she never felt over 26 years of age. Debra loved and spoiled her grandkids with an amazing deck large enough for everyone to have room, along with a pool that was made for unstoppable fun at grandma Debbie’s for the summer. She was preceded in death by: her parents, Jack and Helen (Pedersen) McNichols; husband, Ted Brown; and a brother, Jerry McNichols. Debra is survived by: her children, Katrina (Paul) Braughton and Corey (Nicole) Brown all of Elkhorn; Nine grandchildren; her partner in life, Bill Wehmiller; a brother, Don McNichols of Chicago, IL and a sister, Linda Vergamini. Memorial service will be held at 11 am, Friday, August 23, 2019 at Bethany Lutheran Church in Elkhorn with Rev. Judith Rainforth officiating. The family ask if you are attending the service that we all wear bright colors to reflect Debra’s personality. A light lunch will be served after the services at Bethany Lutheran Church. The Reichmuth Funeral Home of Elkhorn is caring for the Brown family at this time.

Debra Brown, age 65 of Elkhorn, died on Monday, August 19, 2019 at her home in Elkhorn with her loving family at her side. She was born the daughter of Jack and Helen (Pedersen) McNichols on May 29, 1954 in Blair, NE. After graduating from... View Obituary & Service Information

The family of Debra Ann Brown created this Life Tributes page to make it easy to share your memories.

Send flowers to the Brown family.