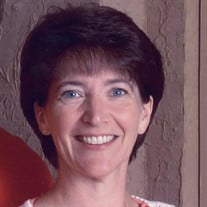 Debra Lea (née Wirthele) Todd, age 63, passed away peacefully in her home in Omaha, NE on Christmas Day, December 25th, 2021, after a courageous battle with esophageal cancer. Her family was by her side and cared for her until the end. Debbie was born on October 10, 1958 in Lincoln, NE to Paul Arnold and Carole Ann (née Yearsley) Wirthele. Debbie attended school and lived in Burr, NE during her childhood, and then attended Douglas High School, graduating in 1976. She attended the University of Nebraska - Lincoln, and earned her Bachelor of Science in Home Economics in 1980. While attending UNL, she met the love of her life, Steve, who later told his father that he fell in love with her because she was “always smiling.” After graduation, the couple married on June 14th, 1980. They made their home in Illinois, where after a few short years, they became parents. The pair missed the “Good Life” back in Nebraska and returned to Omaha, expanded their family, and eventually moved to Kearney, Nebraska, where Debbie worked as a paraprofessional in Kearney Public Schools for twenty years. Debbie retired in the fall of 2020, after she had a benign brain tumor removed. This was, unfortunately, only the beginning of her health problems. Debbie loved being a mother, raising her three children, Laura, Bryan, and Lisa. Someone once said that only the best mothers get promoted to grandmothers, and Debbie took her next role seriously too. She was the best grandma, spoiling her grandbabies with sweets, surprises, and so much love. Her love of children was apparent in her choice of a career; she worked with children in two different school districts for almost thirty years total despite having other career qualifications. Most people knew Debbie for her laugh and her smile. She collected windsocks, whimsical knickknacks (especially birds and holiday and seasonal decor), and was easily distracted by her house plants. She was an avid reader and enjoyed perusing Pinterest and cookbooks for new ideas. Debbie loved to bake for her family, whether it was the long list of family cookies at Christmas, homemade rolls at Thanksgiving, or her husband’s favorite chocolate chip cookies or brownies. Although she tried to impart her housekeeping skills to her children, each of the three have only had varying degrees of success in upholding her cleanliness values. It was clear that she felt a clean home was a source of pride and joy. Together, Debbie and Steve enjoyed traveling, attending Husker games, and spending time with family during their long marriage. Debbie was preceded in death by her father and mother. She is survived by her husband of forty-one years, Steve, her three children, Laura Cushing (Denton), Bryan Todd (Addi Schurrer), and Lisa Williams (Raymond), her brothers, Craig Wirthele (Cheri) and Paul Wirthele (Chris), her sister, Patty Bassett (Steven), her grandchildren, Carter and Layla Cushing, and Sophie Williams, three granddogs, numerous nieces and nephews, and many other friends and family.

Debra Lea (née Wirthele) Todd, age 63, passed away peacefully in her home in Omaha, NE on Christmas Day, December 25th, 2021, after a courageous battle with esophageal cancer. Her family was by her side and cared for her until the end. Debbie... View Obituary & Service Information

The family of Debra L (Wirthele) Todd created this Life Tributes page to make it easy to share your memories.