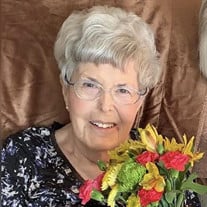 Delores S. Eichler was called home to Jesus on August 7, 2021, at the age of 88 years. She was preceded in death by her beloved husband, Jim Eichler, and her parents and siblings. Delores is survived by her two daughters and their husbands:... View Obituary & Service Information

The family of Delores "Dee" Susan Eichler created this Life Tributes page to make it easy to share your memories.

Send flowers to the Eichler family.