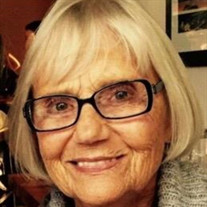 Delores Carol Christensen Reeve was born on November 29, 1931 in Minneapolis, Minnesota to Hans and Augusta (Homuth) Christensen. She grew up in Minneapolis where she graduated from Patrick Henry High School in 1949. As a young girl, Dee enjoyed dancing, making costumes for the local park pageant, running around the Crystal cemetery with her friends and going to football games. She also remembered walking to school in below zero weather without boots - in Minnesota! Dee married Thomas Klemz after high school and they were blessed with five children: Charles, Carolyn, Craig, Chris and Cynthia. Dee and Tom raised their Air Force family in West Palm Beach, FL, West Point, NY, and London, England. They were transferred to Offutt AFB in Omaha, NE. Tom was killed in a car/ train accident in 1965. The 5 children were all under 15 years. Dee married Bill Reeve in 1966 and they were blessed with one daughter Catherine. Bill and Dee moved to Ginger Cove in Valley after the older children left the nest. Bill, Dee and Cathy attended St. Mark’s Lutheran Church for many years. Dee worked at UNMC as an administrator in the Ophthalmology Department for 20 years until her retirement in 1991. She was active in her Women’s Circle at St. Mark’s. Dee enjoyed sewing and ceramics as a young adult, and gardening, tennis, and travel, after moving to Valley. She was always very active - walking with friends at the Cove, traveling with her tennis team (and winning a Regional Championship in KC), and working in the yard with Bill. Bill and Dee also enjoyed traveling to places including Gulf Shores, AL, Costa Rica, Banff, and the Dominican Republic. She was a very strong woman with high expectations and a deep love for her children. Dee’s life revolved around family and faith and pointed all six children to an active relationship with God. Dee passed away on June 3, 2020 at her home in Omaha at the age of 88 years. She was preceded in death by husbands, Thomas Klemz and Willard Reeve. Dee is survived by daughters: Catherine (Chris) Johnson of Omaha, Carolyn Chaffin of Elkhorn and Cynthia (Gary) Guth of Cedarburg, WI; sons, Charles (Kathy) Klemz of Fargo, ND, Craig (Kathy) Klemz of Klamath Falls, OR and Chris Klemz of Tampa, FL; grandchildren Jenny Penrose, Beth Copeland, Tim Klemz, Morgan Chaffin, Mallory Weisbeck, Thomas Klemz, Erin Klemz, Bailey Del Rio, Drew Stalnaker, Katlyn Beattie, Reeve Johnson, Ryland Johnson and sixteen great grandchildren. . Memorial donation in her name can be made to her church St. Mark’s Lutheran church and can be left or mailed to the Reichmuth Funeral Home in Elkhorn.

Delores Carol Christensen Reeve was born on November 29, 1931 in Minneapolis, Minnesota to Hans and Augusta (Homuth) Christensen. She grew up in Minneapolis where she graduated from Patrick Henry High School in 1949. As a young girl, Dee enjoyed... View Obituary & Service Information

The family of Delores C Reeve created this Life Tributes page to make it easy to share your memories.

Send flowers to the Reeve family.