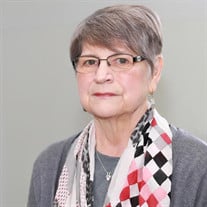 Deloris Annette (Anderson) McKenzie was born on March 5, 1946 to Harold and Bernice (Johnson) Anderson in Lyons, Nebraska. Imagine her father’s surprise when Dr. Hughes came out and told him there was going to be another baby! So her twin brother, Dale Alan, was born. Twins were rare in those days, especially in a farming community. When out in public, they received a lot of attention. They were best pals growing up on the farm purchased by there grandparents in 1918. They had playhouses in the groves, made mud pies, and built tree houses and shacks for hideouts. They didn’t have a horse, but tamed a cow named Lucy. She was very slow so they would coax her with cornstalks to get her to move – the good life growing up on a farm in Nebraska. Dale lives there and still farms the land today. Deloris took her kids and grandkids to visit, and they have enjoyed many memories. Deloris was baptized and confirmed in the Lyons United Memorial Methodist Church and later in life, became a member of the Presbyterian Church. She graduated from Lyons High School in 1964. On October 1, 1966, she married Ronald Ray McKenzie. For a few years Dee worked for Northwestern Bell Telephone Company and United Life Insurance of Omaha. Ron and Dee had three children: Kristin, Kimberly, and Brian. When she became a mother, Dee became a full-time housewife. She had a licensed day care where she cared for many children over the years. Dee was a member of PEO Chapter IH in Elkhorn. She was an avid bridge player and if someone said Bridge Game, she would be there to play. She loved to travel with her family and friends and loved the many places they went over the years in the good O’ USA. Dee was an early riser to get the newspaper so she could work the daily crossword puzzle, Sudoku and word jumble. She said it was good for one’s mind. Deloris passed on March 13, 2022 at her home in Elkhorn, Nebraska. She was 76 years old. She was preceded in death by her parents, infant brother Lyle, and sister Darlene Carter. Dee is survived by her husband Ronald of Elkhorn, daughters Kristin McKenzie of Elkhorn, Kimberly (Tom) Arnold of Chicago, IL, and son Brian (Hilary) McKenzie of Omaha; grandchildren: Allison, William, Kyler, Jillian, Jocelyn, and Anderson; twin brother Dale (Fran) of Bancroft, NE, and nephews and nieces. Memorial service 11 AM Friday, Reichmuth Funeral Home, Elkhorn. Visitation Thursday 5-7 PM at the funeral home. Inurnment at the Lyons Cemetery, Lyons, NE at a later date. Memorials to the Nebraska Humane Society or Hope Presbyterian Church.

Deloris Annette (Anderson) McKenzie was born on March 5, 1946 to Harold and Bernice (Johnson) Anderson in Lyons, Nebraska. Imagine her father&#8217;s surprise when Dr. Hughes came out and told him there was going to be another baby! So her... View Obituary & Service Information

The family of Deloris Annette McKenzie created this Life Tributes page to make it easy to share your memories.

Send flowers to the McKenzie family.