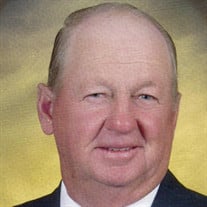 Dennis Joe Plambeck was born to Joe and Clara (Logemann) Plambeck on October 31, 1936 at the family farm west of Millard. He graduated Millard High School in 1953 and continued working on the family farm. In 1960 he married Anna Marie Quinn and they went on to have four children and 7 grandchildren. Dennis and his brother started Plambeck Brothers Plumbing company in 1964. He continued plumbing and farming for many decades until his retirement in 2003. That retirement lasted one day. He decided that not working wasn’t for him and went back to plumbing for his son Mike. He worked until he was 76 years old and if he had been physically able, would have worked until the day he died. Dennis enjoyed many years with the Millard bowling leagues and has plenty of trophies to show for it. He was very involved as a 4-H leader. An avid Kansas City Royals fan, he would rarely miss watching or listening to games. Summer family vacations were often spent going to games at KC’s Kauffman Stadium. Later he and Anna Marie found a love for Branson, Missour and would go several times a year. In 1993, they moved from the Family Farm, which is now Millard West High School, to just 5 short blocks west, and lived there until 2017 when they then moved to retirement living. Dennis passed on October 2, 2021 at the age of 84 years, 11 months and 2 days. He was preceded in death by his parents Joe & Clara Plambeck, brothers: Loren and George & Karen Plambeck, son-in-law Bob Hubbard, brothers-in-law: Don Lage and Bill Mann, and sister-in-law Judy Plambeck. Dennis is survived by wife Anna Marie of Omaha, children: Cheryl & Dan Polodna of Omaha, Linda Hubbard of Omaha, Mike & Leann Plambeck of Gretna, and Matt & Christy Plambeck of Omaha; grandchildren: Nick, Jake, Katie, Madelyn, Mike, Jr., Garett, and Lilly; and his siblings: Lois Lage of Arthur, NE, Karen & Norman Mortensen of Crab Orchard, NE, Carita Mann of Papillion, NE, and Dale Plambeck of Omaha. Funeral Mass 10:30 AM Wednesday at St. Stephen the Martyr Catholic Church. Visitation at the church Tuesday from 5-7 PM with a vigil service at 7 PM. Interment Mt. Auburn Cemetery. In lieu of flowers, memorials to the family for later designation.

Dennis Joe Plambeck was born to Joe and Clara (Logemann) Plambeck on October 31, 1936 at the family farm west of Millard. He graduated Millard High School in 1953 and continued working on the family farm. In 1960 he married Anna Marie Quinn... View Obituary & Service Information

The family of Dennis Joe Plambeck created this Life Tributes page to make it easy to share your memories.

Send flowers to the Plambeck family.