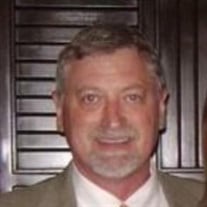 All services are subject to governmental restrictions of 10 people in a room at one time. If you will be attending either of these services, be aware of these restrictions and possible delays while at the funeral home. memorials to the family for later designation Dennis Dee Thomas was born on March 16, 1954, in North Platte, Neb. He passed away peacefully at the Nebraska Medical Center, surrounded by his loved ones and listening to his favorite Elvis tunes, on March 9, 2020. Dennis spent his childhood in the small town of Orleans, Neb., where he played sports, served as a Boy Scout, read voraciously at the Cordelia Preston Library (one of the only air conditioned buildings in town) and generally got into just the right amount of trouble. He was raised by his mother, Violet, and his stepfather, Howard, who he credits for his work ethic, fastidiousness and love for the outdoors. Dennis graduated from North Platte High School and attended Kearney State College where he met fellow student and love of his life, Ann. After graduating with a bachelor of arts degree in history, Dennis and Ann married and moved to Lincoln where Dennis attended and graduated from the University of Nebraska College of Law. He was a member of the Nebraska Bar Association for 40 years. As Dennis started his legal career in the finance and insurance industries, he also started a family, welcoming sons Marcus Evan on October 25, 1980, and Collin Ellis on May 23, 1983. Dennis was a devoted dad and loved coaching his boys in various sports and enjoyed time with them outdoors--from playing catch in the backyard to hiking rigorous mountain trails in Colorado. Dennis was also a loyal friend who nurtured decades-long friendships. Following his retirement, Dennis enjoyed socializing with friends, neighbors and family. He was always ready with a laugh and a good story. In fact, Dennis will be remembered as a lifelong learner and storyteller. After pursuing an interest in genealogy, Dennis uncovered a fantastic family story, a true tale of murder and revenge in the old west. He couldn’t resist putting it on paper and published The Wrong Brother just after he retired. That achievement perhaps sums up so much about Dennis--he was curious, smart and took his dreams and pursuits head on. In addition to socializing and writing, Dennis enjoyed gardening, Husker football, riding his motorcycle and, most notably, all things Elvis Presley. He would often boast that he not only had the opportunity to visit Graceland, but also saw the King in one of his last concerts. Again, this is a man who knew his priorities and made them happen. Dennis is preceded in death by his mother Violet, father Bruce, and stepfather Howard. He will be remembered as a loving and devoted husband to Ann (Scheetz); proud father to Marcus and Collin; supportive father-in-law to Stephanie (Collin) and Kate (Marcus); dependable big brother to Cecilia and Rose; committed brother-in-law to Janelle and Jack Beatty and Betty Scheetz; and overjoyed grandpa to Charles (Charlie), Joseph (Joey) and Vivian (Vivy).

All services are subject to governmental restrictions of 10 people in a room at one time. If you will be attending either of these services, be aware of these restrictions and possible delays while at the funeral home. memorials to the family... View Obituary & Service Information

All services are subject to governmental restrictions of 10 people...

Customized sympathy cards. Mailed for you.