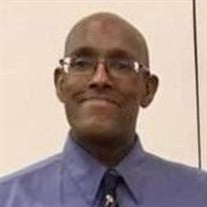 Derick Lee Bluford, 58, was born on December 10, 1962 in Sioux City, Iowa and was called home on Thursday, December 9, 2021, at CHI Mercy Hospital in Council Bluffs, Iowa due to complications from Covid. Derick was the son of Rev./Dr. Grady L. and Dr. Harriet L. (Trosper) Bluford. He graduated from Sioux City North High School in 1981 and Morningside College in 1985 with a Bachelor's Degree in Music Education. Throughout his career he served as the Director of Instrumental Music at Bishop Heelan Catholic High School in Sioux City, Lewis Central High School in Council Bluffs, Iowa; Del Rapids High School, Viborg High School and Lake Andes Public Schools, all in South Dakota. At the time of his passing, he was employed as an Instrumental Music Educator at Elkhorn Middle School and assisted at Elkhorn High School in the Elkhorn Public Schools. Additional employment included the Securitas Security Company and Advanced Automotive in Omaha, Nebraska. Derick maintained a private instrumental studio and fostered lifelong learning as well as mastery of one's craft. He served as an adjudicator and as a guest clinician for both jazz and concert bands throughout South Dakota, Iowa and Nebraska. Derick loved Drum Corps International and had the honor of serving as brass instructor for the Blue Stars Drum and Bugle Corps. He was honored to perform with numerous well known instrumental groups throughout his career. Some of these included: The Sioux City Municipal Band, South Dakota Symphony, Bluffs Big Band, Bass Trombone Faculty for the Clark Terry Big Band Jazz Camp and the Rich Matteson Mile High Jazz Camp. When he wasn't teaching, Derick enjoyed playing video games, watching cartoons and movies, and following his interest of a diverse plethora of sports. His other passion was working on and rebuilding cars. Derick was preceded in death by his mother and father and survived by his sister Dr. Michelle Bluford of Omaha, Ne. Other survivors include two aunts and one uncle: Beatrice and Everett Jackson of Tullahoma, Tenn; Verona "Cookie" Trosper of Sioux City, Ia and numerous cousins, colleagues and friends. Honorary Pallbearers are Henry Larweh, Marvin Larweh, Maynard Larweh, Carter O'Neel, Drew Veomett and McKaylee Houng. A Celebration of Life Service will be held on Monday, December 20, 2021 at Reichmuth Funeral Home in Elkhorn, Nebraska. Visitation will be held from 4pm - 5:30pm with family present and The Celebration Life Service will begin at 5:30pm. Memorials may be sent to the Derick Bluford Family in care of Reichmuth Funeral Home. For your safety and the safety of others, please wear a mask during the Celebration for Derick.

Derick Lee Bluford, 58, was born on December 10, 1962 in Sioux City, Iowa and was called home on Thursday, December 9, 2021, at CHI Mercy Hospital in Council Bluffs, Iowa due to complications from Covid. Derick was the son of Rev./Dr. Grady... View Obituary & Service Information

The family of Derick Lee Bluford created this Life Tributes page to make it easy to share your memories.

Send flowers to the Bluford family.