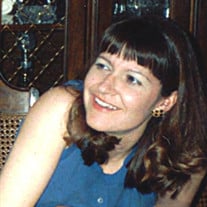 Diana Marie Sauer was born July 19, 1962 in San Diego, California to Clarence “Hank” and Gerry (Mabee) Sauer. Diana grew up in Groton, Connecticut, and Omaha, Nebraska. In Omaha, she attended Wakonda Elementary School, and graduated from Omaha North High School in 1980. As a young girl, she was active in Brownies and Girl Scouts. Diana married Joseph Morris on October 8, 1983 at Miller Park Presbyterian Church in Omaha, and to this union, two sons were born; Joseph Eugene, Jr. and Jay Evan Morris. The family made their home in Omaha, but Diana and Joe later separated. Diana worked for MUD from 1983 until 1997, and was a member of PETA and the ASPCA. Her favorite color was purple, favorite flower was a daisy, and she enjoyed cheering for the Dallas Cowboys. She loved pop music, especially Michael Jackson, and his song “Billie Jean”. She liked to relax with a cold beer, and maybe watch “Bonanza” on TV. She was especially proud of her two sons. Diana was a sweet, unpredictable, child-like, and quiet woman, who will be remembered for how special she was to all who knew her. Diana died unexpectedly at her home in Omaha on Tuesday, August 10, 2021 at the age of 59 years and 22 days. She was preceded in death by her grandparents Fred and Mary Sauer, and her Uncle Bob (Robert Sauer). Diana is survived by her sons Joseph Morris, Jr, his fiancée Elizabeth Bennett, and her son Christian, of Excelsior Springs, MO, and Jay Morris of El Paso, TX, parents Hank & Gerry Sauer of Yutan, siblings, David Sauer of Omaha, Robin Sauer, and wife Donna of Yutan, Suzanne Wick, and husband Dan of Pacific Junction, IA, and James Sauer of Yutan.

The family of Diana Marie Morris created this Life Tributes page to make it easy to share your memories.

Send flowers to the Morris family.