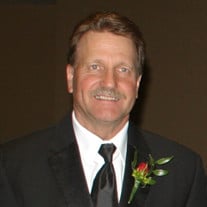 In lieu of flowers, the family requests memorials to Christ Community Church in Don’s name. Donald Lee Anderson was born January 29, 1952 in Omaha, Nebraska to Chester and Ruby Anderson. Don grew up in Omaha where he attended Swanson Elementary School, Arbor Heights Junior High School and graduated from Westside High School in 1970. He went on to attend Nettleton Business College, earning a degree in computer programming. Growing up, Don enjoyed riding his little red tractor in the basement, playing baseball, going to his cousin’s farm in Newman Grove during the summer, and travelling most years to California for Christmas – especially when it was by train! As a teen, he loved singing and playing the guitar, riding his motorcycle and driving his first car that he and his brother Ron purchased together – a 1969 Plymouth Road Runner! Don married Susie Hall on November 20, 1981 in Sylmar, California and to this union, two children were born; Julie and Darren. Don and Susie made their home in Omaha before moving into the house that Don built west of Bennington in 1998. Working as a mason contractor, Don was a Vice-President and co-owner of Chester Anderson and Sons Inc. for 35 years with his brothers Carl and Ron. Before retiring and selling his share of the CAS, Masonry in 2010, he was involved with several notable building projects: the Lied Transplant Center, the Roman Hruska Federal Courthouse, Papillon-LaVista High School, Elkhorn South High School and even helped build Christ Community Church! Don loved worship music and especially the song “Amazing Grace”. His favorite color was blue, and a favorite movie was “Caddy Shack”. He appreciated an old-fashioned "meat and potato" meal or dining out at a Mexican restaurant where he could sip a margarita. Don was an avid Husker fan and even followed them while living in California. Giving his grandkids rides on his John Deere tractor was a favorite pastime. He was a stickler for punctuality and a major pet peeve of his was people not returning his tools to their proper place! Don’s one claim to fame was appearing on Family Feud in 1984 with Susie, Ron, Kathy and mother Ruby. (And yes, they won the big money!) Most of all, Don cherished his salvation through his Lord and Savior Jesus Christ, deeply loved his family and working alongside his brothers in the family business. He was loved by many friends and enjoyed serving along with them in various ministries! Donald L. Anderson, age 67, of Bennington, went home to be with his Lord on November 13, 2019 after a valiant battle with cancer. Don is preceded in death by parents Chester and Ruby Anderson and sister-in-law Loni Anderson. Survived by wife Susie Anderson of Bennington, children Julie (Seth) Brown of Lincoln, NE, and Darren (Courtney) Anderson of Bennington, and his beloved grandchildren; Avery, Austin, Gianna, Brynlee and Teagan, brothers and sister Carl Anderson, Carol (Jan) Janura, and Ron (Kathy) Anderson, multiple nieces and nephews, and many well-loved friends. Don was co-owner of Chester Anderson and Sons with his brothers for 35 years before retiring in 2010. Funeral service 10:30 AM Monday, Christ Community Church, 404 S. 108th Avenue, Omaha. Visitation at the church Sunday from 5-7 PM. Private interment at Prospect Hill Cemetery, Elkhorn. In lieu of flowers, the family requests memorials to Christ Community Church in Don’s name.

In lieu of flowers, the family requests memorials to Christ Community Church in Don&#8217;s name. Donald Lee Anderson was born January 29, 1952 in Omaha, Nebraska to Chester and Ruby Anderson. Don grew up in Omaha where he attended Swanson... View Obituary & Service Information

The family of Don L. Anderson created this Life Tributes page to make it easy to share your memories.

In lieu of flowers, the family requests memorials to Christ Community...

Send flowers to the Anderson family.