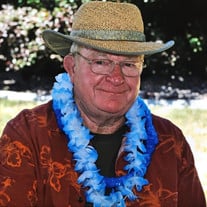 Memorials to Bethany Lutheran Church or The Nebraska Humane Society. Donald Lee Doll was born on February 2, 1932 to Robert H. and Myrtle (Rohwer) Doll in Omaha, Nebraska. Don grew upon on the family farm. Don graduated from Elkhorn High School in 1951, where he enjoyed playing football. Donald was drafted into the Army and served as artillery survey specialist from 1953 to 1955. The last unit he was assigned to was C battery 286 field artillery. While in the military, Don was awarded the National Defense Service Metal and Army of Occupation Germany. Don had a busy year in 1955. He married Lois (Moore) Doll in Elkhorn, Nebraska on October 29, 1955. They were blessed with two daughters, Diane and Susan. Don also started in the Engineering Department of Omaha Public Power District in 1955, where he worked until his retirement in 1994. Don made many life-long friendships with co-workers at OPPD. Don was a member in Sparks and High Voltage Retirement groups. Don had great love for his family and enjoyed going to Colorado to visit Susan, his two grandsons and his two great-grandchildren. He went white-water rafting, visited various gem shows, played games and enjoyed numerous Thanksgiving get-togethers. Don enjoyed visiting Diane in Kansas, where they often drove through the Flint Hills Prairie and even went on a 2-day covered wagon trip. He was so proud to go see his granddaughter Rose perform in her dance competitions. Don’s hobbies and interests included spending time with the grandkids, golf, bowling, playing cards, and having breakfast with his friends and coffee groups. Don enjoyed antiquing, garage sailing, and always appreciated a good bargain. Don was member of the Mason’s and VFW. One of his favorite shows was Backyard Farmer, and he used this knowledge on his own yard which always looked manicured. Don also loved watching movies such as Young Frankenstein, James Bond, Naked Gun and Blazing Saddles with his grandsons. Don had season tickets and loved going to the Nebraska Cornhusker football games. Don went skydiving for the first time on September 24, 2016 at the age of 82 and loved it. He was a vintage aircraft enthusiast and flew in a variety of planes including the B-17, B-24, B-25, B-29, P-51, and a 1928 Ford Tri-Motor. Anyone who knows Don knows he had a sense of humor and loved his dog, Nanook, who will have a new home in Kansas. Don passed away Wednesday, July 1, 2020 at Lakeside Hospital in Omaha, Nebraska, surrounded by his family. Don is preceded in death by his wife Lois (Moore) Doll, infant son Alan, his parents Robert and Myrtle (Rohwer) Doll, and his brother Robert Doll, Jr. He is survived by his daughters, Diane (Gary West) Doll of Junction City, KS and Susan (Jacob Miltenberger) Armstrong of Arvada, CO; 3 grandchildren: Ryan (Victoria) Armstrong, Dylan Armstrong, and Rose West; 2 great-grandchildren, Ronin and Wynter Armstrong; and his deeply beloved dog, Nanook.

The family of Donald Lee Doll created this Life Tributes page to make it easy to share your memories.

Memorials to Bethany Lutheran Church or The Nebraska Humane Society.

Send flowers to the Doll family.