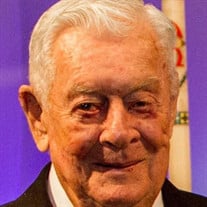 Memorials to St. Michael's Lutheran Church, Omaha, or the Valley American Legion Donald L. Lorenz was born July 19, 1928, in Fremont, Nebraska. He was raised in Valley, Nebraska. Don graduated from Valley High School in 1947. From there, he was drafted into the Army in 1950, and fought in the Korean War. Donald was awarded the Bronze Star for Meritorious Service. Following his time in the Army, he earned his bachelor’s degree from the University of Omaha. Donald and Loretta met while working for the same company and were married in 1960. They were blessed with 2 daughters. Leslie was born in December of 1961, followed by Meralee, in January 1963. Don was the Sales Manager for the H.J. Heinz Company until he retired in 1989. He and Lori bought an Airstream trailer and traveled for 20 years. They saw the entire United States (except Alaska) and most of Canada. From there, Don and Lori spent their winters in Arizona in the early 2000s. Donald spent his remaining years happy and very close to his family. Donald loved his family and getting the family together for events. He always said after retirement that his main job would be spoiling his grandchildren, and great grandchildren, at which he was absolutely successful! Don was full of life and positivity, always with an attitude that left everyone feeling better just having talked with him. He will forever be loved by many. Don was preceded in death by his parents, Otto J. and Carol A. Lorenz. He is survived by his wife Loretta, daughters Leslie (Jeff) and Meralee, sister Carolyn “Kay” Bevington (Gail), 6 grandchildren, Michelle Heston (Matt), Brittney Laber (Anthony), Lindsey Allen, Heather Payne (Devin), Jordan Fisher (Molly), and Colton. In addition, he was adored and survived by his 8 great grandchildren, Tyler, Macyn, Gage, Jace, Westyn, Carter, Maxwell, and Kaiden. Donald L. Lorenz, age 91, of Omaha, died 5-26-2020. Preceded in death by his parents Otto and Carol. Survived by wife Loretta, daughters Leslie & husband Jeffrey Fisher, and Meralee Allen, all of Omaha, 6 grandchildren, 8 great grandchildren, sister Kay and husband Gail Bevington of Fremont, sister-in-law VeAnn Buchholz of Omaha, and many nieces and nephews. Funeral service 11 AM Saturday at the funeral home in Elkhorn. Interment Prospect Hill Cemetery in Elkhorn with military honors. Visitation following CDC guidelines for gatherings from 2 to 8 PM Friday with family present from 6-8 PM at the funeral home. Memorials to St. Michael’s Lutheran Church, Omaha, or the Valley American Legion.

Memorials to St. Michael's Lutheran Church, Omaha, or the Valley American Legion Donald L. Lorenz was born July 19, 1928, in Fremont, Nebraska. He was raised in Valley, Nebraska. Don graduated from Valley High School in 1947. From there,... View Obituary & Service Information

The family of Donald Lee Lorenz created this Life Tributes page to make it easy to share your memories.

Memorials to St. Michael&#39;s Lutheran Church, Omaha, or the Valley...

Send flowers to the Lorenz family.