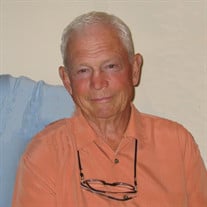 Due to current restrictions, a private family service will be held, and a public celebration of life ceremony will be scheduled for a later date. Memorials may be made to the family for future designation. Donald D. Thomas was born November 29, 1934 in Blair, Nebraska to Jim and Opal Thomas. Don grew up in Tekamah, Nebraska, and as a young boy, enjoyed sports, specifically baseball, basketball, and track. Don held the school record for many years for the discus and shot put, but he excelled in baseball. He was signed by the S.t Louis Cardinals on June 9, 1953 as a pitcher. Don married Mary Bowland in May 1955 (the day after pay day, he liked to recall). To this union, 4 children were born; Brian, Cindi, Donald, and Brad. Donald passed away after only a few short hours. They raised their family in Omaha while Don owned and operated a Phillips 66 station until 1982. At that time, they decided to go home, and moved back to Tekamah, where they owned and operated the Duck Inn. After retiring, Don and Mary moved to Waterloo to be closer to their family. Don enjoyed hunting, golfing, gardening, playing cards, and he coached his 2 sons in Little League for many years. He loved his Kansas City Royals and Big Red football, but he especially loved having his family come to visit. Don never believed in doing anything halfway. He went big, or he went home. Don went home to be with the Lord on April 18, 2020 at Lakeside Hospital in Omaha, at the age of 85. Don is survived by his wife of 64 years, Mary, his children; Brian (Annette) of Omaha, Cindi (Kieth) Hansen of Waterloo, and Brad (Mary Jo) of Ashland, 6 grandchildren; Justin, Natalie, and her fiancé Justin Hughes, Joe, Chris, Jade, and husband Kyle Larsen, and Brad Lee, and 9 great grandchildren; Jordan, Samuel, Karter, Ryder, Luca, Ella, Logan, Owen, and Vaugh, Don’s brother James Eugene (Peggy) of Omaha, his sister Connie (John) Litel of Lancaster, CA, brother-in-law Leo Bowland of Tekamah, sisters-in-law Marge Sheets of Tekamah, and Dorothy Megrue of Lincoln, and many other family and friends. Thank you for sharing his life.

Due to current restrictions, a private family service will be held, and a public celebration of life ceremony will be scheduled for a later date. Memorials may be made to the family for future designation. Donald D. Thomas was born November... View Obituary & Service Information

The family of Donald Dean Thomas created this Life Tributes page to make it easy to share your memories.

Due to current restrictions, a private family service will be...

Send flowers to the Thomas family.