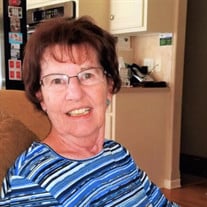 Doris Maxine Wolff was born on January 12, 1944 to Jack and Doris Lingle in Fremont Nebraska. After graduating from Fremont High School Doris would attend a Keypunch School which allowed her to get a job with Mutual of Omaha as a Keypunch Operator in 1965. She would work at Mutual of Omaha for the next 32 years in the Underwriting Department in various positions. On October 7, 1965 Doris would marry Don Wolff in Omaha Nebraska. Don, Doris and the three girls (Lori, Sandi, and Dena) beside us and under our feet would start a journey that lasted 54 years until her passing on November 10, 2020 due to Alzheimer’s. Doris spent the last 2 years as a resident in the memory unit of Esprit at Whispering Ridge in Omaha Nebraska. That was the beginning and the end. Now the good times in between. A time of love, hope and enjoying having fun with her friends and family. Doris was active in her church working on different activities including teaching Sunday school. Doris hosted most of our family gatherings for several years. She believed that her house was always open to anyone who needed help. She loved watching her grand kids grow up and then the great-grand kids which let her have even more fun. Doris was never afraid to impart her wisdom on the kids whether they agreed with her or not. Most of all She loved the little kids. When you take her into a store she would talk to every little kid she saw. During her working years and retirement Doris loved to travel, dance, and watch the birds. We traveled around by ourselves or with friends enjoying what the country had to offer like the oceans, mountains, fishing, casinos, stage shows, shopping and buffet’s since good food was always a pleasure. Doris enjoyed a good movie or the animals at the zoo. We danced in a lot of Ballrooms together and there is one thing for sure; Doris could not sing but she could dance, and dance we did from being kids to adulthood. Doris could Waltz, Polka or Jitterbug with the best of them. For several years Doris and I coached Girls Little League Softball. I coached and Doris doctored and listened to all the problems of young girls growing up. We were successful in winning several tournaments. During her early years of marriage Doris took up crocheting then on to making Christmas ornaments and decorations with the girls. She would expand to collecting old ceramic mom & pop figurines followed by paintings, assembling puzzles some of which were framed, all these things had kids in mind. At night when Doris was put to bed at Esprit she would look up at her walls of paintings and pictures where she shared with God whatever she was thinking. Doris was a loving mother and friend to all and a blessing put on this earth for all to love. I have asked that the song “Somewhere” be played for her. In the song it says that “Somewhere there’s a place for us” and I know Doris will find it and keep it till I get there. The family is requesting memorials be made to: The Alzheimer's Disease Research and left of mailed to the funeral home.

Doris Maxine Wolff was born on January 12, 1944 to Jack and Doris Lingle in Fremont Nebraska. After graduating from Fremont High School Doris would attend a Keypunch School which allowed her to get a job with Mutual of Omaha as a Keypunch Operator... View Obituary & Service Information

The family of Doris Maxine Wolff created this Life Tributes page to make it easy to share your memories.

Send flowers to the Wolff family.