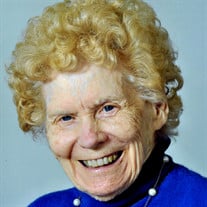 Dorothy Sanborn was a teacher, a farm wife, and a mother--roles she embraced and that gave shape to her life. After graduating from Anita High School, Dorothy attended Normal Training to become a teacher in country schools where she was responsible for education, janitorial duties, and maintaining the fire. Dorothy found her true calling in life. She was happiest when she was teaching. At a time when not many women attended college, Dorothy put herself through UNI and earned a B.A. in Education. She taught for a few years before taking a 9-year hiatus, during which she mothered her children, Stephen and Debra. She returned to the classroom in 1966, and continued teaching until retirement at the age of 80. Her students remember her as their favorite teacher who insisted on their best efforts but with a loving style. One student remembers never hearing her raise her voice in the classroom. She had a fondness for the kids who came from rough homes and for those who struggled with learning. When her husband died in a farming accident in 1980, Dorothy said, “Those kids saved me. I had to put a smile on my face and go to work every day.” An important aspect of her life as an educator was her membership in Delta Kappa Gamma, a professional society for women educators, which offered her opportunities to attend national conventions with fellow teachers. Dorothy was also a educator outside of the classroom, as a 4H leader and Sunday school teacher for 40 years. ------ Dorothy married Virgil Sanborn in 1950. The couple built a life of love on the farm, where they would walk beanfields in the evening, holding hands, and Virgil would lift Dorothy over the fences. Virgil restored old cars and one of their favorite activities was driving around and going for ice cream in the old Buick or Studebaker. Dorothy and Virgil had the best of marriages. He had a special way of teasing her out of a sour mood. She always laughed about his tattoo that he got in the Navy. It was of her nickname “Dot.” She laughed about he would have done if he’d married Rosie instead. They met in church youth group, dated for 8 years and she finally agreed to marry him. She always used to say it was the best decision of her life. Dorothy was both a hard worker and a lady of self-respect. When she was 70, she fell off a ladder while painting the hog house and broke her ankle in three places. She pulled herself 200 yards, over the gravel driveway to the house. But before calling 911, she called the even older neighbor lady to help her clean up. A huge garden was central to Dorothy’s summers on the farm. She preserved and canned peaches, green beans, plums, pears, tomatoes and froze corn and carrots. Dorothy was proud of her small grocery bill, since she raised so much of the family’s food herself. ------ Dorothy’s thriftiness and the sacrifices she made were to offer her children opportunities she had not had herself. For example, she wore the same brown coat with the fur collar for years while making sure her children had music lessons, FFA and 4-H camps. She used her teaching income to pay for her children’s college educations as well as church camps and international travel. In return, she expected her children to excel: an A- wasn’t good enough for Dorothy. Dorothy liked nice things. She would save and save to get a quality item instead of wearing a bargain. And she always paid in cash. Dorothy’s greatest joys were her grandchildren Stephanie, BJ and Chris. She wouldn’t miss a band, chorus or play performance. She encouraged and supported them in everything they enjoyed. She especially loved overseeing 4-H projects and baking with them. A wiener roast in the grove was their reward after picking up sticks. She made sure each one got to attend Grandparent/Grandchild Church camp with her. The grandchildren also each spent a week on the farm during the summer where they enjoyed board games, cards and croquet. Spending time with family and friends, County Fair judging, and church filled Dorothy’s heart with joy. Her huge smile reflected that joy to those who surrounded her, and who will miss her dearly. Dorothy at the age of age 93, died on Tuesday, April 23, 2019 at the Elk Ridge Assisted Living in Elkhorn. She was preceded in death by: her parents; husband, Virgil Sanborn; son, Stephen Sanborn; and a sister, Darlene Reints. Dorothy is survived by: her daughter, Deb (Bill) Eidam of Elkhorn; grandchildren, Stephanie (Brad) Plouzek of Bennington, NE, Will Eidam of Oklahoma City, OK, Christopher Eidam of Millard, NE; and great grandchildren, Scarlett, Micah and Samuel Plouzek, and Brody Eidam; Nieces, Diane Jungman and Renee Asp; nephews, Greg and Vance Reints. Memorials can be made to either the Dexter United Methodist Church or to the Dorothy Sanborn Scholarship Fund and can be mailed to the Reichmuth Funeral Home at 21901 West Maple Road - Elkhorn, NE 68022 who is caring for Dorothy and her family at this time.

Dorothy Sanborn was a teacher, a farm wife, and a mother--roles she embraced and that gave shape to her life. After graduating from Anita High School, Dorothy attended Normal Training to become a teacher in country schools where she was... View Obituary & Service Information

The family of Dorothy M. Sanborn created this Life Tributes page to make it easy to share your memories.

Dorothy Sanborn was a teacher, a farm wife, and a mother--roles...

Send flowers to the Sanborn family.