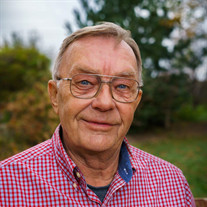 Duane W. Rohe, age 73 of Omaha, died at his home with his family at his side on Tuesday, June 18, 2019. If Duane were asked to describe himself and his life, there is no doubt he would be able to do it in a space much shorter than this sentence you are reading right now. He was a man of few words. While there are not enough words available to adequately describe the depth of his strength, selflessness, and humility, here is his family’s futile attempt to do just that. Duane was born on January 12, 1946 to Martha and Vernon Rohe in Carroll, IA. Immediately, he was thrust on the path to value hard work and possess integrity as the first of eight children born to farmers. Tirelessly and certainly without complaint, Duane did his chores and provided an example for his siblings Larry, JoAnn, Allen, Linda, MaryJane, Daryl, and Janet of what it is to work hard. He graduated in 1964 from Manning High School in Manning, IA and later attended Commercial Extension and Electronic Computer Programming Institute both in Omaha. At the age of 20, Duane was drafted in the Army in 1966 and served his country faithfully until his honorable discharge on August 1, 1968. With the drive of a locomotive, Duane went from farm to military to employment at Union Pacific. Shortly, after the start of his career with Union Pacific, Duane met the love of his life: his hard-bodied, 1970 Dodge Coronet. Shortly after buying the Dodge Coronet, Duane met the true love of his life, Edna (Eddy), and they married April 30, 1971. Their 48-year marriage was filled with celebrations, adventures and challenges by the names of Jason, Darron, and Brandon. Three boys. Poor Eddy, right? Once again, Duane tirelessly and certainly without complaint provided an example of what it is to be a good person for his three boys and subsequent five grandchildren: Mackenzie, Alex, Riley, Malorie, and Antigone. He volunteered working nearly every election, donated blood, helped neighbors with anything they needed, and chauffeured the family on countless trips back to the farm; back to his roots. Duane was a consummate teacher. He taught in such a way the student didn’t even realize he or she was learning. His honesty, fairness, integrity shone so bright, there was not an option but to be influenced to be a better, stronger person. After 33 years of faithfully serving Union Pacific until his retirement in 2001, Duane diverted his energy back to the land and suburban farming, otherwise known as mowing neighborhood lawns. He undoubtedly provided exemplary service for his neighbors. Duane’s strength and grace were no better on display than when he battled cancer a total of 3 times. The final time Duane was diagnosed with cancer, doctors gave him an initial prognosis of less than 1 year. He survived nearly 2 years. Duane was a man of few words. But his words echo and reverberate in all of those he touched. Any time he and a family member would part ways, he would have three phrases that he surely would like to pass on to you now, “Be careful.” “Have fun.” “Do good.” And know that with each phrase, he is saying, “I love you.” He was preceded in death by: his parents, Vernon and Martha Rohe and a brother, Allen Rohe. Duane is survived by: his wife, Edna “Eddy” Rohe of Omaha; sons, Jason (Laura) Rohe, Darron (Tina) Rohe and Brandon (Mura) Rohe all of Omaha; grandchildren, Mackenzie, Alex, Riley, Malorie and Antigone Rohe all of Omaha; brothers, Larry Rohe of Missouri Valley, IA and Daryl Rohe of Manning, IA; sisters, JoAnn Rowedder and Janet Goecke of Omaha, Linda Sporrer of Dedham, IA, and MaryJane Stribe of Carroll, IA. Memorials in his name can be made to the Cancer Research Institute and left or mailed to the Reichmuth Funeral Home at P.O. Box 67 - Elkhorn, NE 68022

Duane W. Rohe, age 73 of Omaha, died at his home with his family at his side on Tuesday, June 18, 2019. If Duane were asked to describe himself and his life, there is no doubt he would be able to do it in a space much shorter than this sentence... View Obituary & Service Information

The family of Duane W. Rohe created this Life Tributes page to make it easy to share your memories.

Send flowers to the Rohe family.