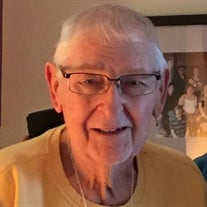 Edward James Krenk III, born to Edward James Krenk II and Evelyn Krenk on January 26, 1941. Edward was married to Sharon Rae Krenk (Youngstrom) and had four beautiful children: Theresa, Randy, E.J., and Kendra. Our Dad’s early childhood was spent on a farm near Osceola, Nebraska. At an early age, he and his brother Fred would ride their pony to school and life was simple. After losing his father at the age of 7, his mother moved the family to Schuyler to be closer to family. His Uncles, Wes and John, took the boys under their wings and taught them to hunt and fish. He also earned the rank of Eagle Scout in the Boy Scouts of America program, something he was very proud of. It was during high-school when Edward developed his passion for cars. He owned several throughout his life beginning with a 61’ Chevy and ending with his 66’ Corvair Convertible. Dad was a Navy veteran, and had the privilege of serving aboard the aircraft carrier USS Kitty Hawk. I remember asking him many years ago what made him join the Navy. He smiled a bit and proceeded to tell a story of working on a farm one summer after he graduated. He was driving a tractor in a field on his way home, it was hot as hell and boring. It was at that moment he knew he wasn’t cut out for farm work and wanted to see the world. Dad enlisted and became a Nuclear Specialist doing exactly what he set out to do, travel the world. He played golf in Cuba, rounded the Horn of South America, had stops in Chili, and made it all the way to Japan. He traveled the ocean for 2 years crossing the equator twice and witnessed the last nuclear bomb tested in the atmosphere. He made many life-long friends and memories in the Navy. After the Navy, he moved to back to Schuyler, NE and enrolled at Southeast Community College in Milford Nebraska, earning a degree in Auto body. After graduation, he got a job in Omaha where he met his wife of 49 years, Sharon Rae Youngstrom. She immediately captured his heart and 6 months later on October 26, 1966, they were married. He and his bride moved back to Schuyler to be closer to family where he opened his own body shop. Later Dad would move his family back to Omaha where he became a claims adjuster for American Family Insurance. His career at American Family spanned over 25 years, retiring in 2003. Retirement would not slow him down as he now had the opportunity to see the world again, this time with his wife and friends, Patty and Don. Their travels took them to the Australian Outback, the Windmills of Holland, the Pyramids of Egypt, and the Alaskan Glaciers. He reconnected with many of his Navy friends and became active in Naval Weapons reunions across the country. Later, when traveling became difficult, he and Sharon spent their winters in the warm Arizona weather. Edward was a practicing Catholic, and attended St. Patrick’s church where he volunteered for many activities. He was a loving husband, father, grandfather, great-grandfather, and friend to many. He loved cars, hunting, fishing, camping, traveling, cards, movies, and watching Family Feud. He had no regrets, lived life on his own terms and was loved my many. He will be missed. .

The family of Edward James Krenk III created this Life Tributes page to make it easy to share your memories.

Send flowers to the Krenk family.