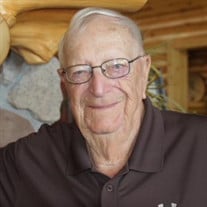 Edward Temple Robinson Jr, 96, passed away peacefully surrounded by family and friends on October 15, 2020. He was born on March 13, 1924 in Waterloo, Nebraska to Agnes and Edward (Ted) Robinson. Ed graduated from Waterloo High School. He continued his education at the University of Colorado, the University of Nebraska and UNO. Ed joined his family seed business, JC Robinson Seed Company, after the death of his father and led the operation as President for 55 years. He also served as President of Golden Harvest Seeds. In 1972 Ed was instrumental in the inception of the Golden Harvest Seed brand, which continues today. He was president of the corn & sorghum division of the American Seed Trade Association. Aksarben recognized Ed as Agriculture Man of the Year in 2001 and he was a member of the Elkhorn Masonic Lodge, where he received his 70 year pin. Ed met the love of his life, Donna Deffenbaugh, on a Missouri River barge. They were married in 1946 and had 4 children. He imparted the love of camping, boating and many other family activities to them. Ed was a man of many talents and hobbies. He enjoyed photography, lapidary work, cooking, grilling, gardening, hunting, fishing, and boating (especially deep sea adventures on the Sea of Cortez). He was a collector and supporter of art and was a friend to many people. Ed had a deep appreciation of Native American culture and art. He cared about the needs of others and has been involved in many philanthropic endeavors over the years. Ed will be greatly missed by his children: Doug (Gina) Robinson of Omaha, NE; Sara (Gil) Ziff of New York City, NY; Sandra (Marty) Blount of West Des Moines, IA; and Edward III-Rob (Cheryl) Robinson of Omaha, NE. He is also survived by his grandchildren; Andy Robinson, Zoe Ziff, Stefan Ziff, Amanda McCurnin, Marty Blount, Ted Blount, Laurel Robinson, Jim Robinson, Scott Robinson, and Matt Robinson. He has 14 great-grandchildren and 1 great-greatgrandchild. Ed was preceded in death by his wife, Donna; his sister, Carol McLean; and his parents, Agnes & Ted Robinson. The family would like to extend a special thank you to the staff at Fremont Home Instead, Teresa Mohon, John Groh & Hospice of the Midwest who showed great care and compassion with Ed and we could not be more grateful. Memorials gifts may be sent to the Agnes Robinson Waterloo Public Library, 23704 Cedar Drive, Waterloo, NE 68069.

Edward Temple Robinson Jr, 96, passed away peacefully surrounded by family and friends on October 15, 2020. He was born on March 13, 1924 in Waterloo, Nebraska to Agnes and Edward (Ted) Robinson. Ed graduated from Waterloo High School. He continued... View Obituary & Service Information

The family of Edward "Ed" Robinson Jr. created this Life Tributes page to make it easy to share your memories.

Send flowers to the Robinson family.