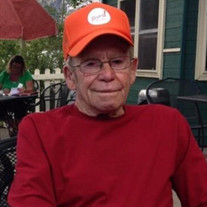 Edwin Walter Fallon was born on February 8, 1932 in Elk City, NE to Edwin Fallon Sr. and Matilda (Hansen) Fallon. He grew up in Elkhorn working on the family farm and graduated from Elkhorn High School in 1951. On March 2, 1957 he married Donna Mae Foster, his wife of 64 years. To their union, three daughters were born, Vicky Lee, Lesa Marie, and Kimberly Ann. Ed was a hard worker and in his younger years worked driving a hay truck, trash hauling, and doing lawn service, and later in life went on be a truck driver, construction laborer and greenskeeper. In his free time, Ed enjoyed camping, reading, dancing, listening to country music as well as his favorite song, “Jeremiah was a Bullfrog.” Keeping his yard well maintained was a source of pride for Ed. He was also a member of the Lions Club and liked to cheer for his favorite teams, the Huskers and the Kansas City Chiefs. Moolattes from Dairy Queen were something Ed couldn’t have too many of, and it was known that when he had a meal, he always ate one plate of food and never asked for seconds. Although Ed could be stubborn at times, he also had an excellent sense of humor and valued spending time with his family. They will remember him telling them, “Glad you got to see me.” Ed had a heart of gold and will be dearly missed. Ed was preceded in death by his father, Ed Sr.; mother, Tillie; and brothers Lavern and Gary. He is survived by wife, Donna Fallon; daughters, Vicky (Mike) Sramek, Lesa (Dave) Harrie and Kim (Cary) Spellman; grandchildren, Lindsy, Justin (Brooke), Mikaela (Alan), Nathan, Kevin, and Kory; great-grandchildren, Matthew, Marcus, Alivia, Kaden, Nolan, Adalyn, and Declan; siblings, Richard Fallon, Roger (Linda) Fallon, and Danny (Lori) Fallon; and many nieces and nephews.

Edwin Walter Fallon was born on February 8, 1932 in Elk City, NE to Edwin Fallon Sr. and Matilda (Hansen) Fallon. He grew up in Elkhorn working on the family farm and graduated from Elkhorn High School in 1951. On March 2, 1957 he married Donna... View Obituary & Service Information

The family of Edwin W Fallon created this Life Tributes page to make it easy to share your memories.

Send flowers to the Fallon family.