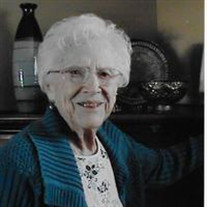 Memorials can be made to the family for future designation. Elaine Katherine Plambeck was born December 27, 1921 south of Elkhorn, Nebraska on the Plambeck homestead to Herman and Katie Plambeck. She attended District 13 School through 8th grade. She graduated from Elkhorn High School in 1939. She married Lyle “Pete” Winterburn on March 28,1942. To this union three children were born; Lyla, Donna and John. Elaine loved working with 4H and Masonic Eastern Star Children’s Home in Fremont, NE. Elaine had a passion for music. She worked with music groups including; Pete’s Quartet, Eastern Star, and played at church starting as a young girl. She played both piano and organ. Elaine was very involved with Eastern Star and was named Worthy Matron of Luna Chapter #169. It was a very special time and memory for her. Elaine and Pete were both very involved with Grange, Elkhorn schools, church activities, and were instrumental in building the first Nursing Home in Elkhorn. They loved to travel… really loved to travel! Their travels took them to more than 11 countRies and most states in the U.S. They would pull out of the driveway and ask, “right or left?” And no matter which way “it was always right”. It was the Winterburn’s Wandering Wonderbus! Elaine is survived by her daughter; Donna and husband Jim Osterchill of Bennington; son, John and wife Kathy Winterburn of O’Neill; Son-in-law, Stan Peterson of Kansas; brother, Myron and Marjie Plambeck of Indiana; four grandchildren, Beth Osterchill Ebmier (Chris), Jeff Osterchill (Colleen), Kimberly Winterburn Metschke (Monte), Jake Winterburn; 7 great-granchildren, Tessa, Elli, and Jasper Metschke, Katie Osterchill, Beau and Brice Winterburn; and Julia Ebmier. She is preceded in death by her parents; husband Pete; daughter, Lyla, and brother Harlan.

Memorials can be made to the family for future designation. Elaine Katherine Plambeck was born December 27, 1921 south of Elkhorn, Nebraska on the Plambeck homestead to Herman and Katie Plambeck. She attended District 13 School through 8th... View Obituary & Service Information

The family of Elaine Katherine Winterburn created this Life Tributes page to make it easy to share your memories.

Memorials can be made to the family for future designation.

Send flowers to the Winterburn family.