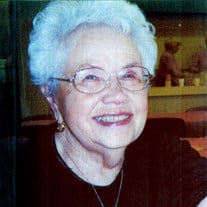 Elizabeth “Bette” Grant Bette Jane Grant, age 92 of La Vista, died on Tuesday, January 21, 2020 at the Hospice House in Omaha. She was born on October 10, 1927 on a farm north of Missouri Valley, Iowa in Calhoun township the daughter of Hugh and Agnes (Chalmers) Whannell. Bette was the youngest of 5 children, with a sister, Doris and three brothers, Bruce, Don and Paul. At age 6 she started school at a country school in Calhoun County. When she was in the second grade, her family moved to Shelby, Iowa where she would later graduate in 1945. After graduation from high school, she worked for 5 years and attended Broadlawns School of Nursing in Des Moines, Iowa and graduated in 1953 with her nursing degree. Her first job as a nurse was at Manning, Iowa at the local Hospital, until 1958 when she moved to Sioux City, Iowa to assume a supervisor position at Gordon Memorial Hospital. Then in 1960, Bette moved to Clarkson Hospital in Omaha where she was an OB Supervisor. In 1961, Bette joined the Beta Sigma Fi Sorority. Bette would meet Charles Grant in 1964, and on April 16, 1971 was united in marriage and moved to Elkhorn and lived there until Charles passed on September 8, 1973. Bette remained in Elkhorn until 1976 when she moved to Omaha and began working at Children’s Hospital until her retirement in 1989. Bette liked to travel all over the United States and parts of Europe. She was an active member of the Extension Club, Red Hat Ladies and her sorority. She was preceded in death by her parents; husband, Charles; her three brothers; one sister, three step-sons; a great grandchild; a daughter-in-law; three sisters-in-law and a brother-in-law. Memorials can be made to: Children's Hospital - Omaha

The family of Elizabeth "Bette" Grant created this Life Tributes page to make it easy to share your memories.

Send flowers to the Grant family.