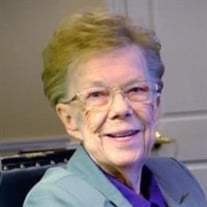 Memorials to Lakeside Christmas Fund Live stream available at https://webcasts.lifetributes.com/1106178 I was born on May 10, 1928, in a rural area in Monona County, Iowa, where I lived on a farm, went to a one room school, and graduated from Castana High School in 1945. I was in the senior class play and 4-H Club. I began working as a secretary at the Monona County Farm Bureau & Extension office in Onawa. I met my husband, Eugene, and was married November 9, 1947. Gene worked for the U.S. Corps of Engineers. While in Onawa, I was active in Business and Professional Women and the Methodist Church. Our family transferred to Yankton, South Dakota in 1953 and Omaha in 1956. I have two daughters, Gail and husband Doug, in Omaha and Mary Kay and husband, Bob, in Lincoln. I have five grandchildren and seven great grandchildren. While in Omaha, I was active and served as a leader in the P.T.A., Girl Scouts, Engineers Wives, and Wheeler Presbyterian Church in South Omaha. Gene and I held local and national offices in the Presbyterian Mariner Club. I worked as a secretary at the Omaha Public School JROTC office and taught beginner’s sewing for Omaha Public School Adult Education, as well as serving as financial secretary for Wheeler Presbyterian Church for many years. My hobbies over the years have been sewing, cooking, lots of cards (especially Bridge), bowling, golf, traveling, and reading. Gene and I traveled to all 50 states, Canada, Mexico, including four cruises to the Caribbean, Panama Canal, Alaska, and the Baltic. We sold our home in South Central Omaha and moved to a townhome in Millard in 1990. I lived there for two years after Gene passed away. My children agreed that I should move to an independent living apartment. I moved to lakeside Village on January 14th, 2012. I have kept active in several activities. Blanchard, Elsie L. age 92 years of Omaha, NE Survived by daughters and sons-in-law Gail and Doug Helton of Omaha and Mary and Robert Schoettger of Lincoln; 5 grandchildren and 7 great grandchildren; sister-in-law Jean Hadden of Omaha; Visitation Thursday noon to 1 PM with funeral service at 1 PM all at the funeral home. Interment Evergreen Memorial Park; Condolences and live stream of the funeral service available at www.reichmuthfuneralhomes.com Reichmuth Funeral Home 21901 W. Maple Rd. 402-289-2222

Memorials to Lakeside Christmas Fund Live stream available at https://webcasts.lifetributes.com/1106178 I was born on May 10, 1928, in a rural area in Monona County, Iowa, where I lived on a farm, went to a one room school, and graduated... View Obituary & Service Information

The family of Elsie Loraine Blanchard created this Life Tributes page to make it easy to share your memories.

Send flowers to the Blanchard family.