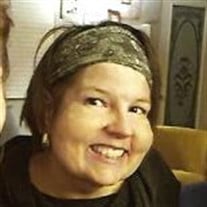 Erin Marie Bertinetti, 43, of Omaha, Nebraska, went home to be with the Lord, Friday, March 12, 2021. Erin was born March 2, 1978, in Omaha, to Joseph and M. Colleen (nee Burds) Bertinetti. She graduated from Elkhorn Senior High School in 1996. Erin attended the Creative Center College of Arts and Design, Omaha, from 1998 to 2002; she earned an Associate of Occupational Studies and an Associate of Occupational Studies in advanced graphic design. In addition, she won two prestigious design awards: an AIGI (American Institute of Graphic Artists) for an illustration in 1999, and an ADDY (American Advertising Federation) for a corporate logo in 2000. Erin resided in Omaha until 2003, when she moved to Gilbert, Arizona. Although her educational background was in graphic design, she discovered a passion for working with special needs children while in Arizona. Erin returned to her beloved Omaha in 2012, where she continued to serve children with special needs. On April 1, 2013, her employment at Region V Services, Gretna, Nebraska, commenced. Ultimately, it marked the day she became a member of a very special family. Erin was committed to the mission of helping people with developmental disabilities live, work, play, and learn in the community, but more importantly, she strived to help individuals overcome social stigmas, achieve facets of autonomy, and live happy, fulfilling lives. Erin cherished time with family and friends. Summer weekends were often spent camping along the banks of the Elkhorn River with dear friends. Equally important in her life, were Erin’s canine companions, whom she loved and adored. It would be an understatement to describe Erin simply as a “crafter”. She continuously embarked upon new projects and immersed herself into each one until she perfected her skills. There were no limits to the plethora of crafts Erin enjoyed creating and gifting. Friends and family could count on her distinctive Christmas cards each December. Erin’s most admirable attributes were undoubtedly her strength, endurance and resilience. She overcame childhood leukemia twice, and defied the odds when she survived 21 years subsequent to a diagnosis of stage IV ovarian cancer. Erin’s tenacity inspired people she encountered at medical facilities, cancer walks, and support groups. She was genuinely a trail blazer for present and future warriors. Erin is survived by mother, M. Colleen Bertinetti of Omaha; father, Joseph Bertinetti (Jane) of Omaha; brother, Scott Bertinetti (Diane) and nieces, Sydney and Samantha, of Mechanicsburg, Pennsylvania; sister, Michelle Bertinetti (Greg) of Gilbert, Arizona; brother, Christopher Bertinetti; and loving aunts, uncles, cousins, and friends. She is preceded in death by her maternal and paternal grandparents. An Erin Bertinetti Memorial Fund has been established. Memorial contributions may be forwarded to Reichmuth Funeral Home, P.O. Box 67, Elkhorn, Nebraska 68022.

The family of Erin M. Bertinetti created this Life Tributes page to make it easy to share your memories.

Erin Marie Bertinetti, 43, of Omaha, Nebraska, went home to be...

Send flowers to the Bertinetti family.