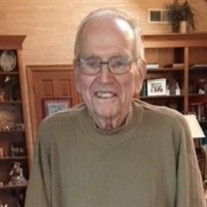 Eugene Kuehn, age 92, passed away peacefully on November 15, 2020, at the Josie Harper Hospice House in Omaha. He was born June 10, 1928, in Elmwood, NE, the youngest of seven siblings, to Herman and Hattie (Wallinger) Kuehn. Gene was confirmed at the Elmwood Methodist Church in 1942 and graduated from Elmwood High School in 1945. On March 22, 1947, Gene married Ruby Ehmke in Marysville, KS. The first years of marriage were spent on a farm in Otoe before moving to Lincoln in 1950 where Gene worked for Continental Trailways Bus Co. until 1960 when he began working for Strauss Bros. Construction in Omaha and later for them in Lincoln. In 1978, they moved to an acreage at Unadilla, NE. Gene and Ruby had three daughters: Linda Stevens, Bennington; Nancy (Mark) Lantis, Lincoln; and Betty (Mick) Jensen, Omaha. After 35 years of marriage, Ruby died in early 1982. Gene then met and married Jeannette (Jan) Hammond on October 15, 1982. They lived in Lincoln for a short time before traveling the U.S. working in various motels, a bed and breakfast, retirement homes, campgrounds and national parks before settling for 15 years in Memphis, TN where Gene worked for the Bonsai Tree Farm, and he and Jan dedicated faithful service to the Memphis School of Preaching and Forest Hill Church of Christ. In August of 2019 they moved to Omaha to be near family and last month they celebrated 38 years of marriage. Gene was hard-working his whole life. He and Jan loved to go to estate sales, hike, entertain their church family and friends, and traveled to many states across the country. His beautiful smile and soft-heartedness will remain in our hearts forever. Preceding Gene in death were his parents, six siblings, wife, Ruby, son-in-law, Jim Stevens, and grandson, Christopher Jensen. He is survived by his wife, Jan, eleven grandchildren, and 16 great grandchildren. A private family gathering and cremation burial in Lincoln Memorial Cemetery will be held at a later date.

Eugene Kuehn, age 92, passed away peacefully on November 15, 2020, at the Josie Harper Hospice House in Omaha. He was born June 10, 1928, in Elmwood, NE, the youngest of seven siblings, to Herman and Hattie (Wallinger) Kuehn. Gene was confirmed... View Obituary & Service Information

The family of Eugene Kuehn created this Life Tributes page to make it easy to share your memories.

Send flowers to the Kuehn family.