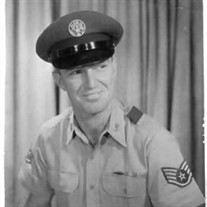 Frank was born in a sod house in Sargent, Nebraska on October 11, 1931. The second oldest of seven children born to John and Marie Fanta. His parents were from Czechoslovakia and were early homesteaders in Custer County, Nebraska. The family lived on several farms in central Nebraska. Growing up Frank learned to hunt, farm the land using horses, and helped out on neighboring farms beginning at the age of 10. At 17 years of age, he enlisted in the Air Force. The country boy traveled first to San Antonio, Texas for basic training and was then stationed in many different places including: Fairbanks, Alaska; Honolulu, Hawaii; Guam; Greenland; and Saudi Arabia. While stationed at MacDill Air Force Base in St. Petersburg, Florida, he met and married his wife Victoria. They were happily married for 56 years. In 1971, Frank and Vicki purchased an acreage in Sarpy County, Nebraska. There they raised their three daughters. Frank farmed his land and enjoyed growing vegetables, fruit trees, and raising animals. In addition, Frank worked at Offutt Air Force Base as a mechanic. He could fix anything or jury-rig a solution. His time in the Air Force made him so knowledgeable about airplanes he could recognize them by their sound or silhouette in the sky. Frank enjoyed polka music and occasionally played the accordion and harmonica. He was an avid Husker football fan and “holy man, women, and child” did he enjoy Lyell Bremser’s commentary on KFAB radio and the Tom Osbourne era. Frank was active in the care of his daughters. He proudly attended their college graduations and weddings. He loved babies and when grandchildren arrived, he spoiled them. He was nicknamed “Grandpa Naps” as no fussy baby could resist his large hands and warm cuddling. He had fond memories of sleeping babies nestled into his neck, teaching them how to walk, and patiently indulged any playful whim. After a difficult struggle with Parkinson’s Disease, he died peacefully on August 26, 2021. Frank is survived by his wife Victoria; daughters and sons-in-law Helen Young (Ed), Cecilia Reynolds (Pat), and Kathleen Uehling (Tim); grandchildren Nic and Peyton Young, Emily and Sean Reynolds, and Josh, Matt, and Jake Uehling; and his siblings Jerry Fanta (Carol), Emma Trouba, and Evelyn Martens (John). Visitation will be September 3, 2021, between the hours of 5:00 p.m. and 7:00 p.m., at Reichmuth Funeral Home, 21910 West Maple Road, Elkhorn, Nebraska. The funeral will also be held at Reichmuth Funeral Home the following morning at 10:00 a.m. Frank will be laid to rest at Omaha National Cemetery.

Frank was born in a sod house in Sargent, Nebraska on October 11, 1931. The second oldest of seven children born to John and Marie Fanta. His parents were from Czechoslovakia and were early homesteaders in Custer County, Nebraska. The family... View Obituary & Service Information

The family of Frank Fanta created this Life Tributes page to make it easy to share your memories.

Frank was born in a sod house in Sargent, Nebraska on October...

Send flowers to the Fanta family.